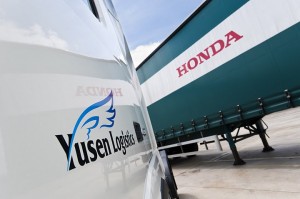 Honda is renewing its contract with Yusen Logistics for inbound collection of material to its Swindon plant in the UK.

Honda of the UK Manufacturing (HUM) appointed Yusen to handle inbound collections in 2011, supporting the production of the Honda Civic, CRV and Jazz at the Swindon plant. This followed an original contract signed in 2006 when HUM appointed Yusen to convert its UK suppliers from independently handling the delivery of material themselves to an ‘ex-works’ set up, where inbound material was collected from the suppliers by a logistics provider working for Honda.

According to Yusen, the company now manages more than 100 routes on a daily basis collecting from 60 vendors to deliver inbound materials to the Swindon plant. The operation involves the use of off-the-shelf technologies with bespoke middleware IT that interact in support of those delivery flows, said the company in a statement.

“Over previous years [Yusen Logistics] have been instrumental in delivering an industry-leading inbound logistics solution – delivering operational spend savings by embracing a Kaizen partnership and minimising HUM exposure to high fleet costs and delays within the operation,” said a spokesperson for Honda UK. “Also within the year, YL’s instrumental lead in IT development resulted in both companies jointly winning the European Supply Chain Excellence Awards’ Innovation in Use of Technology category, as well as the Automotive Global Supply Chain Awards’ trophy for IT Innovation in Frankfurt.”?

Yusen also won the Exceptional Contribution award from HUM at its 2013 Supplier Convention, in recognition of its delivery of continued cost savings, high service levels in meeting operational abnormality management and development of best in class IT systems.

“We are absolutely delighted about this renewal and we look forward to working with HUM to continue developing this industry leading inbound solution into the future,” said Ian Veitch, managing director, Yusen Logistics (UK).

The company would not reveal the length of the latest contract.

Read more about Yusen Logistics' activity in the UK here