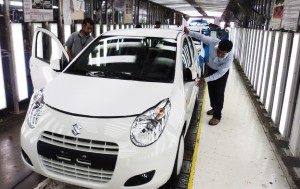 The plan, which was reported in The Economic Times, covers the period between 2016-2026 and aims to achieve a fourfold growth in the industry over that time to reach between $260-300 billion. The plan also aims to make India among the top three automotive industries in the world with passenger car sales predicted to reach between 9.4m-13.4m by 2016 (it is currently the fifth largest automotive market).

According to forecasts from analyst PwC, over the next 10 years light vehicle assembly in India is set to increase by almost 194% to reach 10.8m units, putting it in third place in terms of production behind China and the US. PwC’s forecasts for light vehicle sales, meanwhile, show an increase of almost 238% between 2015 and 2025 to reach 10.2m units, again a third place position behind China and the US. However, it is noticeable that in both cases, India’s increase is by far the biggest, with China’s increase in both production and sales over the coming decade around the 50% mark and the US way down, with a 5.7% increase in assembly over the period and a 9% increase in sales.

To support India’s growth the government said it would be investing to improve infrastructure and also looking to increase exports to between 35-40% of overall output.

The second phase of the AMP will also aim to increase annual commercial vehicle sales to between 2m-4m units, up from 700,000 last year, and grow tractor sales from 600,000 to between 1.5m-1.7m units over the same period.

On the inbound side the government plans will seek a reduction in import duties on raw materials and, as well as implementing the much Anticipated Goods and Service Tax (GST) Bill.

As reported in December last year, the Indian government approved the constitutional amendment bill, and plans to rollout the tax from April 2016.

GST will rationalise state and central indirect taxes into a harmonised goods and services tax, and create a unified market, which will help allow seamless movement of goods across states, an especially important move for the automotive logistics industry that will hopefully also reduce business costs.

Need for clarity
According to industry analyst, IHS Automotive, while preliminary details and figures have been released, the plan lacks clarity in the form of policy direction and real-time benefits for the Indian carmakers, who have been waiting for some time for the

A number of those carmakers that were approached on the implications of the plan were unwilling to comment. Neither was SIAM.

There are a number of economic issues, including investment in infrastructure, that need to be addressed in India, though ironically, it is a lack of public infrastructure that has been fuelling car sales.

“India's growth story rests on internal consumption to a great extent while exports, amid a lack of favourable trade agreements with key economies, largely depend on the labour and material cost advantage,” said IHS Automotive in a briefing. “The country's domestic market suffers from high inflation and interest rates, but growing urbanisation and lack of public infrastructure have been fuelling domestic demand for vehicles, particularly in the passenger vehicle segment.”

First stage
The AMP was launched into its first phase in 2006 for an initial 10-year period with the aim of making India a favourable production location for global vehicle manufacturers. The plan focused on boosting competitiveness in the domestic vehicle manufacturing industry and the flow of technology, demand, brand building and infrastructure, amongst other areas.

Further coverage of the AMP 2026 will follow as details are released over the coming weeks.

The latest plan for the Indian automotive industry will be one of the many topics under discussion at this year’s Automotive Logistics India conference, which takes place in Delhi in December. Learn more and register here