Automotive sales and confidence are returning, with Indian logistics executives seeing brighter days ahead. While many are looking to the Modi government for reforms, some companies most important improvements may still be internal. 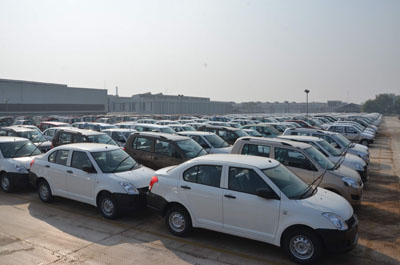 Excitement has pervaded the Indian landscape since the May national elections that swept Narendra Modi and his National Democratic Alliance into government. And while the administration may have yet to transform the Indian economy, its promises have helped to jolt businesses following several years of stagnant growth. GDP grew 5.7% in the April-June quarter, exceeding expectations. Capital markets have also been up, with the NSE Nifty above the 8,000 mark for the first time.

Automotive has been no exception. While sales declined in the last financial year to April for the first time in more than a decade, passenger vehicle sales increased moderately in the first quarter of the financial year following a cut in excise duty, rising nearly 3%, according to Indian carmaker's association, SIAM. Sales this past August were stronger for India’s top three passenger car OEMs, as Maruti Suzuki, Hyundai and Honda (which has now passed Mahindra & Mahindra) registered double-digit gains.

Although exports were flat in 2013-2014 at around 547,000 passenger cars, they have risen nearly 4% between April-July this year. According to Sandeep Chawla, executive director at NYK Auto Logistics India, the country’s exports are forecasted to grow steadily for the rest of the decade, approaching 1m vehicles by 2020.

India’s car hauliers, a benchmark of the sector’s buoyancy, are starting to feel relief. Vijay Sankeshwar, chairman of VRL Logistics, one of India’s largest trucking companies but a new entrant in the car carrier business, boasts of better days ahead. “Not a single of our 100 [car hauling trucks] are lying idle since the Modi government came in,” he claims. Despite India’s inflationary worries, Sankeshwar, a three time Member of Parliament and leader of a 4,000 truck fleet, is confident the mood has changed.

Another car carrier chairman, Vipul Nanda, of Gefco-controlled Mercurio Pallia Logistics, even anticipates a capacity shortage after providers trimmed their fleets. “Soon we will witness a shortage of vehicles as many of us have junked more than 2,000 car carriers over the past two years as we were unable to manage the downturn,” he says.

“The worst is over,” avers Captain Gur-Prasad Kohli, country head of Wallenius Wilhelmsen Logistics India at Chennai, pointing to the fundamentals of India’s economy – a young, aspirational population, and low car ownership – that are likely to lead to more car purchases.

Fiat India Automobiles vice-president of corporate supply chain management, Kalpesh Pathak, is also upbeat about the current government and the industry’s outlook. “The government will definitely work on the infrastructure bottlenecks. They will come out with the right policies to help the manufacturing sector and with that, growth will happen.”

Change, along with more of the same

Not everything is rosy in India, however. It is too soon to point to a sustained recovery, while the sales of many OEMs, including Mahindra, Tata, General Motors and Ford, along with commercial vehicles, are still in the doldrums. For logistics, India faces the same perennial issues of the past decade, including a small, fractured provider base, a lack of equipment standards, poor roads and ports – especially for ro-ro – and a low use of rail freight.

NYK’s Sandeep Chawla says that the carrier industry is in trouble, particularly for those companies that made big fleet investments before sales stalled. “The domestic CBU [completely built unit] transport companies who had invested in huge fleets are facing tough times and several of them are struggling to survive,” he says. 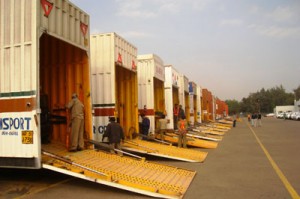 For NYK Auto Logistics, owned by NYK Line, the port problems are particularly irksome. Mumbai port, for example, is positioned to capture growing exports out of the automotive cluster in Pune, however it lacks proper ro-ro facilities. “The services which NYK provides through Mumbai port are ‘just acceptable’ as per our internal standards, and meeting 100% customer satisfaction continues to be a challenge,” Chawla says.

Ravindran Natarajan, head of business development for India at IT and telematics provider Trimble, also points to subscale size companies, a lack of standardisation and a need to improve route engineering across India’s logistics. Chawla, meanwhile, indicates that the industry is still waiting to see action from the government on the issue of truck standards, which vary across the country for length.

“We have been waiting for years for the Indian government to come out with a policy to standardise the road car carrier industry, but unfortunately the industry is still struggling with bureaucratic hurdles,” he says.

But there is progress in some areas, too. Driver training programmes aimed at improving safety and quality have become more standard across larger OEMs and truck companies. The government’s automotive rail policy has led to new services, especially those run by Maruti and APL Vascor. And the Modi government’s pledge to fast track plans for the long awaited centralised ‘goods and service’ tax (GST) could also help transform the network.

Despite executives' general enthusiasm for the new administration, give them the chance to muse on important changes and challenges for their businesses, and many focus more on topics over which official policy has little sway, such as human resources and company relations. WWL’s Kohli, for example, points to the difficulty of staff retention. One of the consequences of India’s recent decline has been that OEMs pull back from outsourcing, limiting opportunities at providers. “In such a scenario, the second and third line of managers hoping that one day they will get promoted find there are no promotions,” he says. “Then they start looking around outside. So people you have invested in suddenly start to leave.”

The issues are not specific to vehicle logistics. Vikas Anand, managing director at DHL Supply Chain India, sees considerable talent leaving the company after it invests in training. “When you look at some of the local companies in India, 3PL and contract logistics companies as well, we can look at them and see there are quite a few of our staff,” he says. “We recruit and train people to create a huge supply pool of talent across the spectrum.”

"We have been waiting for years for the Indian government to come out with a policy to standardise the road car carrier industry, but unfortunately the industry is still struggling with bureaucratic hurdles" - Sandeep Chawla, NYK Auto Logistics India

Fiat’s Pathak bemoans the fact that supply chain is still a poorly regarded profession. “Unless good people get into the domain of supply chain, we will not be able to bring the next level of maturity to the business, which is very essential. In last 3-4 years, that knowledge gap is slowly shrinking but still we have a long way to go in promoting supply chain as a preferred choice for professionals.”

DHL’s Anand also thinks there has been some progress, particularly in emphasising that logistics managers don’t just interact with truckers and warehouses, but are embedded to customer plants and operations to better understand their needs. “However, what you struggle with is getting good people on the floor and ready to soil their hands,” he says.

“Somebody needs to stand up and say, ‘Hey, I want to be the best warehouse manager in India!’ I have not seen an engineer from a good university or an institute saying that to me. Those are the challenges to be honest.” 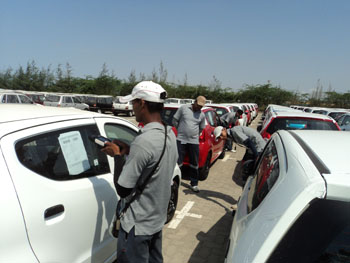 Executives are also looking for improvements in customer-supplier relations, which can be particularly contentious and price driven in India. Chawla admits that a strike last year by local transport companies hurt relations between OEMs and providers. This year, there has been further unrest over rates, particularly moving from the south to the north.

The sales slowdown does not make these relations any easier, but Chawla says a long-term approach and flexibility go a long way. He gives the example of how one customer terminated a contract with NYK for a long leased, dedicated finished vehicle warehouse, which would have meant huge financial losses. However, rather than going the route of lawsuits, NYK and the carmaker worked closely together and converted the warehouse into a parts consolidation centre, from which NYK went on to provide milkrun services. After two years of a successful operation, the warehouse was again converted to a finished vehicle warehouse.

“A flexible and collaborative approach with customer trust assisted us to overcome the challenge,” he says.

Such a scenario is far from being universally applicable in India – not all companies can switch between inbound and outbound logistics, for example. Nevertheless, it is an interesting example of where flexibility, patience and motivation helped a logistics company succeed. While executives have pinned a lot of hope on the growth that Modi’s economic reforms could produce, it will also take plenty of these three ingredients for companies to succeed beyond the bounds of policy.

India's economic and transport reforms, along with other hot topics in automotive logistics, will be discussed in great detail at this year's Automotive Logistics India conference, which will be in New Delhi on December 9-11th.