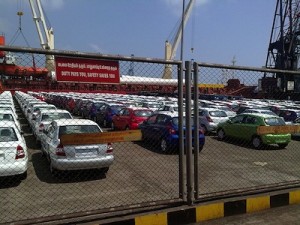 India’s major ports are to introduce a discount of 80% for two years on vessel-related charges for coastal vehicle movements in an attempt to boost automotive sector demand for coastal transport.

Announcing the move, the Ministry of Shipping said promoting coastal movements was one of its major goals and that the discount would apply to ro-ro vessels, PCTCs (pure car and truck carriers) and other vessels. The anticipated increase in demand would help to decongest the country’s roads and railways, it suggested.

Commenting on the development, Sushil Kumar, senior advisor at the Society of Indian Automobile Manufacturers (SIAM), said it welcomed the scheme, adding: “Under normal charges, transportation by coastal shipping is both costlier and more time-consuming, compared to road and rail. Automobile manufacturers have been in constant dialogue with the Ministry of Shipping and Government of India [about] incentivising the coastal route to [make it] comparable to other means of transport.”

It isn’t yet clear how soon the new discount will apply – Kumar said implementation would depend on the individual ports involved – or what the discount will do in terms of port revenues. “However, it is expected the increase volume and increased use of coastal routes will compensate [for any revenue loss] in the long run” he said.

“Coastal shipping of automobiles is in its nascent stages in India at present and only a few trial shipments have taken place,” he added.

On Monday this week, ro-ro vessel the MV Dresden completed its first run between Encore and Cochin on its way to Kandla, connecting car production hubs in Tamil Nadu on the east coast and Gujarat and Haryana in the west. The shipment of more than 1,600 vehicles reportedly comprised mainly Hyundai Motor India vehicles alongside units from Renault Nissan, Ford and Toyota.

At present, over 95% of cars are moved by road in India with the remainder travelling by rail. Both carmakers and ports seem to be pulling together in seeking to make waterborne transport a more viable option, however.

Earlier this year, Hyundai Motor revealed it was exploring options to move cars north by sea to the east of the country from its Chennai car plant to Kolkata, as well as seeking similar routes along the west coast. Maruti is also understood to be looking into waterborne transport.

In June, meanwhile, the port of Mumbai announced it was slashing vessel-related charges to encourage greater coastal movement of vehicles.