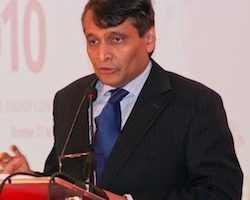 Indian Railways has launched an ‘Auto Express’ train service to carry finished vehicles in both directions between Gurgaon and Nidvanda. The state-run rail giant hopes to increase the number of vehicles carried on the route from 2,000 a month to around 6,000 as it targets a 25% share in national automotive freight (up from its current 3%).

Rail remains a more costly form of transport than road in India and is still considered a premium option. The new service will be timetabled and, at 100kph, will move faster than the current average speed for rail freight, cutting the travel time between Gurgaon and Nidvanda from 70 to 57 hours.

“Like our ever-growing population, auto population is also increasing at a faster rate,” India’s rail minister, Suresh Prabhu (pictured), was quoted as saying in India Railway News. ”In fact the auto sector is a fast-growing economy. If railways can tap it then it will be a major source of revenue. The train would ensure timely delivery of automobiles which would increase the confidence of the auto industry in railway’s credibility.”

A timetabled train for vehicle moves is also running between Kathuwas (Rajasthan) and Melpakkam (Tamil Nadu), according to the Indian government’s press information bureau, though further details were unavailable at the time of writing.

Earlier this year Indian Railways inaugurated its first common user finished vehicle rail hub at Walajabad station, in Chennai in the south of India. The hub is part of the Indian government’s plan to increase the movement of vehicles by rail in India substantially over the next decade.

According to Prabhu, part of the strategy for expanding rail services in India is building more dedicated freight corridors. Currently, construction is ongoing for an eastern corridor from Ludhiana to Dankuni and a western Corridor from Dadri to Jawaharlal Nehru Port in Mumbai, both of which are expected to be completed by 2019.