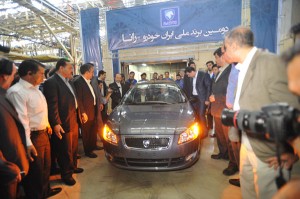 Iran’s largest domestic carmaker, Iran Khodro, has restarted exports of vehicles to Russia and plans to send 10,000 vehicles there by 2015. The first shipment, sent from the carmaker’s plant in Tehran, included the Samand and Runna (left) sedans.

“We can manage the balance between our export and import, should we sell one third of our cars in global markets,” said Hashem Yekehzare, IKCO CEO and president, adding that high quality and adherence to international standards were a priority consideration over volume in the interests of gaining a foothold in those foreign markets.

Iran Khodro had to stop exports to Russia when the country increased the standard permitted to run on its roads to Euro-4 standard. It has now producing certain vehicles to meet that standard.

Yekehzare also said that a suitable aftersales service in target markets was essential, beginning with Russia.

Iran Khodro’s production has tripled compared to last year according to the company and it intends to introduce 10 new models in the next three years. The company reported production of just over 120,000 vehicles between May and June this year, up 178% on the same period last year.

Last November Iran signed an accord with six countries that involved the lifting of certain restrictions on the trade of vehicles and automotive parts. The deal was struck on November 24th in Geneva and involves the US, Russia, China, France, Germany and the UK. Part of it involves the suspension of sanctions imposed on trade in the automotive and aviation sectors, as well as on petrochemical exports and gold and precious metals.

Iran’s economy was crippled by the sanctions imposed on the country over its nuclear programme. The cost to Iran in lost revenue since the sanctions were imposed in 2010 is estimated to be $120 billion, according to US Treasury estimates. Before the sanctions, Iran produced more than 1 million cars per year. Read more here.