Japanese supply chain in US firing on all cylinders 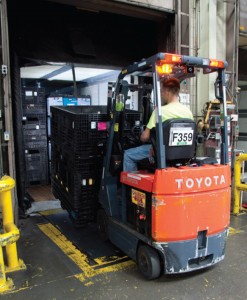 As Japanese OEMs see record growth in US-based production, parts sourcing and vehicle exports, the carmakers are investing significantly to increase manufacturing and logistics capacity across the region.

Japanese carmakers are investing heavily in the US supply chain following growth of more than 37% in vehicle production in the country and 31% for export of American-made vehicles last year, along with a strong recovery in imports. Carmakers including Toyota, Nissan and Honda are further localising the percentage of vehicles and components that it builds and purchases in the US and North America, as well as expanding inbound and outbound logistics infrastructure.

According to newly released data from the Japan Automobile Manufacturer’s Association (Jama), Japanese production in the US during the financial year ending March 31st 2013 hit almost 3.3m (up from 2.4m in 2011).

Component and engine production, together with the purchase of automotive parts by Japanese OEMs in the US, also rose

sharply. Engine production surpassed 3.8m units, while the purchase of US automotive parts reached more than $51 billion in 2012, another all time high according to JAMA and up from the previous year’s $43.2 billion.

The growth for Japanese producers has occurred across the supply chain. Despite the rise in production, and an increase in the proportion of Japanese-brand vehicles sold in the US produced in North America to 70% from 68% the year before, vehicle imports also recovered. Imports to the US from Japan were up nearly 19% to 1.7m units, up from 1.43m on the previous year.

Officials from Jama said the results demonstrate strength in the US economy as well as the recovery that had taken place since the 2011 earthquake and tsunami in Japan. Analysts have also pointed to swings in the Japanese yen that have encouraged brands to diversify production outside of Japan, with the US and Mexico prime beneficiaries. Along with plans to expand US and Canadian capacity, OEMs including Honda, Nissan and Mazda are building plants in Mexico.

A Japanese-American supply chain
Japanese brands are set to continue supply chain and vehicle localisation in North America over the coming years. Nissan North America is expanding its US plants as well as building a new plant in Aguascalientes, Mexico. The company’s US production grew 14% during the last year.

By the end of 2013, Nissan will have added approximately 6,500 manufacturing jobs in the US since mid-2011 to accommodate 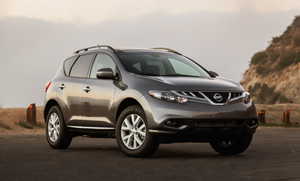 production increases, according to Justin Saia, a Nissan North America spokesperson. The company will also localise production of several models in the US, including the Rogue, Leaf and Murano. Saia said that by 2015, 85% of Nissan vehicles sold in the US will be built in North America – up from 69% in the past financial year.

Honda has also seen its US and Canadian production and exports increase, while a new plant that begins production in Celaya, Mexico next year will eventually increase the number of cars sold in the US that are built in the US to up to 95% – a rate higher or similar to that of American-based carmakers.

Honda has also just announced that it will invest $180m at its Ohio engine plant to expand capabilities in aluminium die casting and engine parts production related to new Honda technology for engines and transmissions. The company says that this increases investment at the engine plant to $500m over the last three years, and $1 billion across all its manufacturing activities in the state in that period.

Toyota is expanding its North American footprint and increasing localisation. Last year the company set a new record for North America vehicle production at 1.78m units across its 14 assembly and component plants. Carly Schaffner, a spokesperson for Toyota Motors Sales USA, said that the proportion of vehicles sold in the US that are build in North America rose to 70% last year, and has hit 71% in the first seven months of this year.

The company has announced plans to increase production capacity for vehicles by around 200,000 units, engines by more than 300,00 as well as additional components across its US and Canadian plants. It will also use a new Mazda plant in Salamanca, Mexico to build 50,000 units a year.

In a major interview with Automotive Logistics, Toyota’s North American logistics team described how it was using a more integrated approach to logistics to design supply chain flows and help influence local supply and manufacturing decisions. 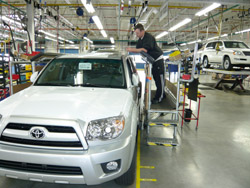 The growth in vehicle exports from the US, along with the planned exports to the US and beyond from Mexico, is alsoprompting investment in vehicle logistics. According to Schaffner from TMS, Toyota Logistics Services, the company’s logistics arm, has added or expanded processing and shipping services at a number of US ports to handle exports, which surpassed 124,000 units last year. This includes new export services for the Venza, built in Georgetown, Kentucky, from the port of Benicia, California to China and the port of New Brunswick, Georgia to Russia.

TLS has also expanded services out of Long Beach, California to Hawaii and Guam, along with exports from the port of Houston to Panama and from the port of Baltimore to Australia, New Zealand and Israel.

According to Toyota, the next phase of Toyota Logistics Services’ expansion will be to support volumes out of Mazda’s new plant in Mexico, which will build a small Toyota car for export to the US and Latin America. Toyota anticipates using truck, rail and short-sea shipping to move the vehicles from Mexico to their respective destinations, said Schaffner.

Honda, which saw US exports surpass 100,000 units last year, will also use regular short-sea shipping services and rail from its upcoming plant in Celaya, Mexico. The carmaker will export by sea to the US east and west coast, which will make it one of the first carmakers in the US to launch regular short-sea services between Mexico and the US. The shipping service will be handled by Japanese line MOL.

Earlier this year, shipping line Wallenius Wilhelmsen Logistics said that it would this year launch a twice-weekly Mexico to US shipping service.