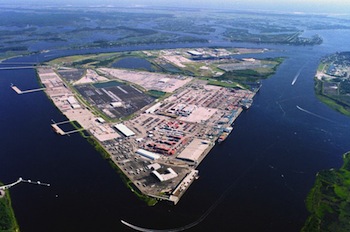 The Jacksonville Port Authority (Jaxport) has signed a new ten-year lease with Trailer Bridge, which offers vehicle and cargo shipping to and from North America, Puerto Rico and the Dominican Republic, to include two additional five-year options.

Trailer Bridge has operated at Jaxport since the company was founded in 1991.

“We look forward to continuing a long and healthy relationship with the Port of Jacksonville,” said Chris Dombalis, chief executive of Trailer Bridge. “This contract solidifies our plans to move forward here in Jacksonville.”

Jaxport executive vice president and chief commercial officer, Roy Schleicher, commented: “For more than 20 years, Trailer Bridge has been an important part of Jaxport’s prominence in the Puerto Rican and Caribbean markets. As one of our major tenants we’re delighted to have Trailer Bridge onboard at Jaxport for years to come.”