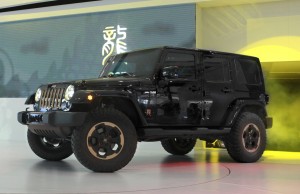 Fiat-Chrysler is extending its partnership with Guangzhou Automobile Group (GAC) to make Jeep models in China from 2015.

Fiat Group Automobiles, Chrysler Group International and GAC reached an agreement last weekend to form a new alliance called GAC Fiat to make the brand. It will develop the current portfolio of Jeep utility vehicles currently imported to the Chinese market. Although details of the new models have yet to be announced, it is believed that at least one of them will be designed uniquely for Chinese consumers.

Three new cars will be launched, with production beginning in late 2015 at a facility in Guangzhou, in southeast China. The venture has been government-approved and production plans due to be finalised over the coming months.

"To reach the necessary capacity for introducing the Jeep models, GAC Fiat is establishing a manufacturing branch in Guangzhou, where the Jeep vehicles will be produced," confirmed a spokesperson for Chrysler.

“Today's announcement represents the next chapter in the proper utilisation and expansion on a global scale of the Jeep brand,” said Fiat-Chrysler head, Sergio Marchionne. “Equally important is our continued development in the Chinese market with an established and respected partner such as Guangzhou Automobile Group."

Fiat-Chrysler already announced earlier this year that it would build a new Jeep model, the Renegade, at a Fiat plant in Melfi, Italy starting later this year, which will also be exported to North America.

There are no plans released as yet to export Jeep models from China.

Jeep has risen in popularity in recent years, with global sales of over 731,000 units last year and an annual growth rate of 4%. Outside the US, China is the Jeep brand’s largest-selling country, with sales of 60,000 cars last year, all of them imported from the US. The Compass Patriot is made in Belvidere, Illinois, the Grand Cherokee at the Jefferson North Assembly Plant in Detroit, Michigan and the Wrangler at the Toledo Assembly Complex in Ohio.

The annual growth rate for Jeep in China is 29%.

Localising production of Jeep will obviously help Fiat-Chrysler to reduce prices and avoid China’s high customs and import taxes. But it could also help to address some other issues around vehicle supply and capacity that Fiat-Chrysler currently faces with long lead times for exports of vehicles to China. Speaking at this year’s Automotive Logistics China conference in Beijing, Bob DeCrick, Fiat-Chrysler’s vice president of supply chain management for Asia Pacific, said that long order-to-delivery times from those markets to China was the company’s biggest challenge.

“We have a four-to-five month window and there is a lot of risk in that timing,” he said, adding that another challenge was the making sure port infrastructure kept pace with its import growth. “We are working with our service providers to make sure that the port facilities and throughput match our demands and that is an ongoing process.”

DeCrick added that he would like to see the introduction of paperless declaration of import volumes as part of the customs and clearance process into China, as well as a simplification of the customs and immigration quarantine (CIQ) procedure.