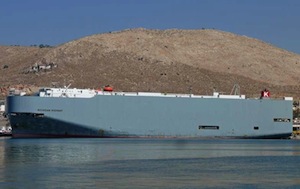 The crew of a pure car and truck carrier (PCTC), owned by Japanese ocean forwarder “K” Line, are reported to have rescued a crew of four yachtsman who were in difficulty in the Atlantic ocean following damage to their vessel’s rudder.

The yachtsmen sent a distress signal to the Maritime Rescue Coordination Centre Delgada (MRCC Delgada) in Portugal, which was picked up by “K” Line’s Michigan Highway crew who immediately headed for the position and successfully rescued the crew of the yacht without any injuries.

The yachtsmen were then taken to the port of Livorno in Italy where they disembarked on 20 November.

The vessel was steered by Captain Ognyan Stanakiev Nikolov and has a total of 23 crewmen, comprising Bulgarian and Filipino nationalities.