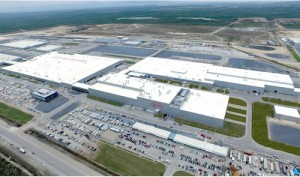 The Korean carmaker said last week that it had completed construction on the $3 billion plant in Pesqueria, in the state of Nuevo León, just 13 months after breaking ground at the site in October 2014.

In total, the company is investing $1 billion in the project. Suppliers are expected to provide an additional $1.5 billion, with 50% of parts and components sourced locally.

The next stage in the plant’s development will be a six-month quality assurance and pilot production project. Mass production of the Forte compact sedan will then begin in mid-2016. The plant has a 300,000 unit annual capacity and will produce around 10% of Kia’s total global output. Next year the plant is expected to make 110,000 vehicles.

As reported in September this year, Kia is in advanced negotiations with the Kansas City Southern de Mexico (KCSM) railway for the construction of 15 railway sidings within the plant. These will be used for the despatch of the Forte model and the sidings are expected to be completed by the end of the pilot manufacturing phase.

In related news, Kia said it had opened 46 dealerships across the country in the last five months and is planning to increase that to a total of 65 dealers serving customers by 2017.