Local production in Saudi may be on the horizon

Sales of imported vehicles in Saudi Arabia are set to increase by another 15% in 2014, led by Toyota and Hyundai, but major carmakers including Chrysler, Ford, GM and Jaguar Land Rover are looking at the potential of domestic production

Banning half its population from driving hasn’t prevented Saudi Arabia from being one of the Middle East’s strongest car markets. New passenger car sales were expected to finish 2013 at around 777,000, a double digit increase from the year before. Market analyst Business Monitor expects sales to increase another 15% in 2014. Almost all of these sales are imports, making the country the largest vehicle importer in the region and an important stop in the global ro-ro trade.

The oil-rich country’s fiscal policy is expected to remain supportive of the economy and the wider automotive market, with GDP forecast to grow 4.3% in 2014. Taking into account longer-term projections, the average economic growth rate is estimated to be in the region of 3-4% according to figures from analyst firm IHS. 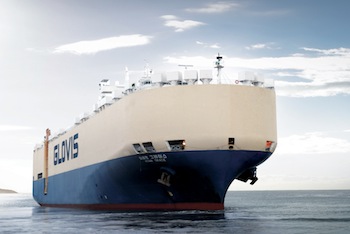 Saudi Arabia has little domestic production, except for some marginal local truck output, including an Isuzu plant in Dammam. Therefore, increased sales means more imports, with Toyota and Hyundai leading the market, and Ford, Chevrolet and Kia following behind. The country is also the largest finished vehicle export market for China’s Geely, which has seen a shift towards knockdown kits in other markets.

Asian brands out in front
Toyota has been exporting to Saudi Arabia since 1955 and has the biggest share of the market at around 40%, with the Hilux pickup truck and the Corolla the most popular models. In 2012 it sold just more than 291,000 units there, exported from global plants including Australia and the US (Saudi Arabia was the fourth biggest export market among US-made vehicles in 2012).

Saudi is the biggest market in the Middle East For Hyundai. The South Korean OEM has around 18% of the market and sold almost 123,000 cars there in 2012,  led by the Elantra and Accord. Up to September 2013 it had imported nearly 107,000 vehicles, the majority supplied from Korea, but with a small number coming from the company’s plant in India, located near Chennai.

The Elantra sold nearly 25,000 units in the first six months of 2013, an increase in sales of almost 53% over the same period the year before. The Tucson and Sante Fe SUVs have likewise sold well, but there is also a notable spike in demand for small to medium-sized vehicles.

While Saudi, like the UAE, is viewed as a good market for premium brands because of higher income earners and the low fuel prices, rising inflation and falling wages could be changing this somewhat.

Energy, land and resources
Energy use is also becoming an issue, according to Thomas Cullen, market analyst at Transport Intelligence.

“Energy used to be cheap, powered by gas through what was known as the Gas Master Pipeline system,” he said. “However, Saudi Arabia is consuming more and more of this internally, not least through the petro-chemical sector.”

Nevertheless, land remains cheap and the country has an advantage thanks to a base of companies providing input materials for the auto industry, including Saudi Basic Industries Corporation (SABIC), a world leader in plastics technology, and Alcoa, which is planning a $10.8 billion aluminium mega-plant.
The Saudi government is also encouraging development through its National Industrial Clusters Development Programme, which includes an automotive branch that aims to attract foreign automotive investment.

Carmakers are responding. Chrysler, Ford and GM have held talks with the Saudi Ministry of Commerce and Industry about establishing local production. Jaguar Land Rover has also signed a preliminary agreement with the ministry to build a plant there to produce 50,000 Land Rovers a year from 2017. Such plans could suggest a potential shift in future away from the import-dominated market, although it would seem inbound vehicles are set to grow over the coming years.