European vehicle carriers are facing a number of pressures relating to road and short-sea transport regulation, with little give so far from the European Commission (EC). 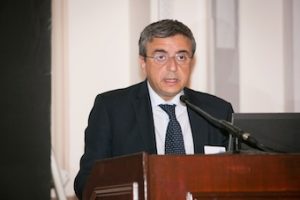 The Association of European Vehicle Logistics (ECG) has been talking to representatives in Brussels about directives governing stimulus packages, vehicle trailer lengths and the impending sulphur emissions regulations affecting maritime transport. These issues were discussed at the ECG’s General Assembly in Dublin this past May – without much encouragement from EU officials.

According to the ECG’s leaders, including its president, Costantino Baldissara, European vehicle logistics companies are approaching a life or death situation.

Car sales across Europe continue to fall, with a number of assembly plants running at as low as 20% capacity, according to figures from analyst LMC Automotive. Capacity utilisation has dropped to 62% on average over seven quarters of contraction and the difficulties are likely to remain in place for the next five years.

While sales are depressed, there are currently 60m vehicles more than 10 years old on the roads in Europe, according to Baldissara. He believes that the situation calls out for an incentive programme akin to the scrapping schemes brought in across Europe in 2009.

Few governments, however, seem likely to reintroduce such stimulus given the emphasis on cutting public spending. Baldissara said that this spending should take precedent over some infrastructure investment. While he thought better connectivity between ports and roads was important, he said the vehicle logistics sector needed to transport more vehicles otherwise companies involved would start going out of business.

He denied that governments don’t have funds available. “Italy is going to have a €15 billion ($19.8 billion) reduction in interest costs because now there is a more stable situation,” said Baldissara. “Is it not possible that they could devote €300m to encourage people to buy a new car? I think that these schemes are a bargain. It is an opportunity more than a cost.”

The ECG is also frustrated that the EC’s revision to Directive 96/53/EC on weights and dimensions for freight hauliers has left out problems affecting car carriers, namely that loaded lengths vary by country and exceed the dimensions stipulated.

Under current EU haulage regulations, when moving between countries, trucks must conform to a maximum loaded length of 18.75 metres with a 40-tonne weight limit, even for countries that have longer limits. Overhangs often exceed the maximum length and the rule’s enforcement would mean a significant impact on transit times and cost, said the ECG.

Claire Whittaker, spokesperson from the EC’s sustainable freight transport department, said that while the Commission is aware of the problem in vehicle logistics, it didn’t allocate a provision for the sector as doing so would have opened up “intensive” discussions that would have delayed the adoption of the directive. “It is still open for discussion,” she said, although the law is already in place.

Jerry Kiersey, managing director of vehicle carrier Green Tiger said he didn’t accept that the inclusion of a separate standard for car carriers was “too difficult to achieve”.

Whittaker said that the EC found the best balance it could. “To say you only see the costs is an over simplification; we addressed as many concerns as we could and you can bring it up in parliament.”

Meanwhile, new regulations on maritime sulphur emissions will be enforced at the beginning of 2015 despite a lack of alternative fuel and the infrastructure to support its distribution or recycling. According to the EC, the cost associated with the new low sulphur bunker is something those forwarders and their customers will have to suffer.

Maurice Mullen, assistant secretary with responsibility for maritime, ports and freight issues at the EC’s Department for Transport said the issue was more a question of what EU member states were going to do and discussions should now focus on something other than repeal because there was no room for manoeuvre on the implementation of the regulations. The EU has adopted the law after it was passed by the International Maritime Organisation, a UN agency.