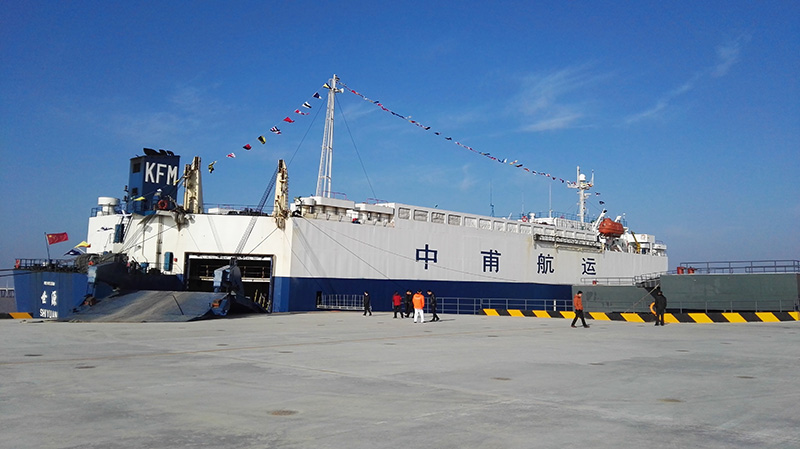 Under the direction of founder and chairman Bo Shijiu, the company now has 40 business divisions, with a profit last year of almost 362m yuan ($58.5m). It currently has seven logistics centres across China, employing more than 1,000 people. In August 2016, it launched an initial public offering (IPO) on the Shanghai stock exchange, raising more than 500m yuan.

Changjiu Logistics’ growth and development is in many ways a good indicator of how China’s automotive and logistics sectors have developed. Over the last 20 years, the country has become the world’s second largest economy and a powerhouse for consumer and manufactured goods. Its automotive industry is responsible for a large share of the sector’s global growth; annual passenger car assembly rose from 565,000 in 1997 to nearly 24m last year. The demand for logistics services over the last two decades has been as dramatic, from serving the rise in manufacturing to China’s e-commerce boom.

Changjiu’s growth took off in earnest in 2003, when the company set up its national headquarters in Beijing, where it benefitted from better access to advanced IT and human resources, says Bo. At the time, Changjiu had 1,000 trucks and was handling all the logistics in northern China for Chinese carmaker Chery, and half of the vehicle distribution for Beijing Hyundai. As China’s automotive sector boomed, Changjiu grew sharply, with annual expansion rates of as much as 80%. The situation has cooled in recent years, but Bo still points to strong double-digit annual rises.

Today, the company is focused on improving quality and efficiency, including in IT systems, multimodal transport and returnable packaging. It is also increasingly going global, encouraged in part by China’s ‘One Belt, One Road’ policy with investments aimed at expanding trade links with other parts of Asia, Europe and Africa. Together with its international subsidiary, CDC International, Changjiu carries out services ranging from the China-Europe Railway to international returnable packaging activities. The company is also in the midst of setting up a comprehensive network of facilities across Europe aimed especially at strengthening automotive trade with China. It has also made it clear that it is interested in acquiring international companies.

Independent benefitsUnlike its direct competitors, including Anji Automotive Logistics, FAW Logistics and Chongqing Changan Minsheng, Changjiu is not a subsidiary of a state-owned carmaker; Bo claims that the company is the largest independent provider of automotive logistics services in China. He claims that has helped the company develop a wide range of OEM customers, including Beijing Hyundai, BMW Brilliance, Chery Automobile, SAIC-GM-Wuling, Chongqing Changan and FAW-Volkswagen, as well as many commercial vehicle manufacturers. According to Bo, it also helps Changjiu to work more freely with other logistics partners.

“Changjiu Logistics has more than 200 cooperating logistics carriers, which ensures stability of the transport resources,” he says.

The company does have some carmaker links, however. Changjiu owns 40% of its subsidiary CDC International, while Chery Automotive and Dalian Port each hold 30%. But while Chery and its joint ventures are important partners, they do not have a controlling stake, nor do they prevent CDC from widening its portfolio.

Since taking the company public last year, Changjiu has added Volvo Cars and ZX Auto, a Chinese SUV-maker. In September last year, CDC began operations with Lingang Modern Logistics to deliver cars for BMW-Brilliance Automotive from Shenyang, in north-east China, to Shanghai via coastal waterways for further distribution in the important east China region. The public offering has also led to a number of ‘logistics base’ investment projects in Changchun and Wuhu, as well as imported vehicle logistics projects. 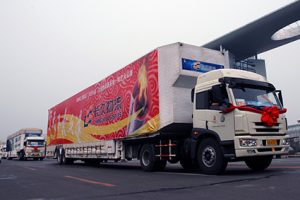 Although an asset-light business, Changjiu Logistics coordinates services in China with more than 6,000 trucks

While domestic growth continues to power its business, Changjiu is especially pursuing international markets. Notably, it began moving Volvo S90 vehicles from China to Belgium for European distribution following a deal with the Geely-owned carmaker, and with the port of Zeebrugge for the launch of the China-Europe Railway. Changjiu is supporting weekly rail shipments of the S90 between Heilongjiang, in north-west China, and Zeebrugge on a 20-day journey. It is the first big international finished vehicle project the company has undertaken. The inaugural shipment in July was also Volvo Cars’ first export of vehicles from China to Europe and one of the most significant examples of using the railway link to ship vehicles between Asia and European markets. Previously Changjiu has handled small volumes from Europe to China for Audi, Volkswagen and Jaguar Land Rover.

The link has the potential to move vehicles back from Europe to China, and build on the import trade it has, though further details have yet to be revealed.

Multimodal mattersWhile Changjiu considers itself an asset-light business, it coordinates services in China with more than 6,000 trucks. As such, the company’s operations are at the forefront of a major policy change with the introduction of the new GB1589 standard for vehicle carrying equipment. As well as enforcing the length of a semi-trailer to 16.5 metres, the regulation has introduced centre-axle trailers as a new option for car transport by road, with a length limit of 22 metres.

To keep up with China’s expanding car market, road hauliers in China have pushed the limits of the 16.5-metre semi-trailer and 27-metre trucks have become an unofficial norm, often with double trailers hauling two rows with as many as 25-30 cars. The enforcement of the new standardwill improve safety and quality. However, it also means a cut in capacity.

As a result of the standard’s formal implementation from September 21st last year, says Bo, “the volume per vehicle will now be seriously reduced, the transport cost increased, and [there will be] a shortage of scheduling vehicles.”

At the same time as coordinating resources to help carriers purchase vehicles that are compliant with the new standard, Changjiu is also looking to other modes to move vehicles in China. “Changjiu Logistics is increasing rail and water transport capacity to reduce the impact of rising road transport costs,” says Bo. “Rail and water transport have the advantages of low cost and high volume. Right now, Changjiu Logistics is actively negotiating price adjustments with car manufacturers.”

[mpu_ad]According to Bo, multimodal transport will be used more in the future across China, and Changjiu is trying to play a leading role. Along with the two international rail routes Changjiu operates out of China – to Russia and Europe – together with its subsidiary CDC International, the company has four ro-ro vessels, with a further two currently being built and 14 planned in the long-term.

Packaging plus four plus moreCDC International, which provides integrated services including ro-ro shipping, parts logistics and packaging services, was set up in 2011. The subsidiary’s total revenue in 2016 was close to 700m yuan and its profit above 50m yuan.

Vegard Synnes, head of key accounts for the division, says CDC has around 30 large customers from the automotive industry, including Chinese and international OEMs and tier suppliers. The company’s part owner, Chery, is CDC’s biggest customer, using both its inbound and outbound services.

CDC set up China Forever Logistics in 2014 (one of four subsidiaries) to provide packaging services for Chery, Jaguar Land Rover and Mazda. That business has now grown to include packaging-related services both in China and globally, says Synnes. “CDC is managing all the returnable packaging for JLR’s joint-venture plant with Chery, CJLR, in Changshu,” he explains. “We also designed all the non-standard packaging for CJLR in China for the Range Rover Evoque, Land Rover Discovery and Jaguar XFL.”

This past autumn, CDC also announced a new joint venture together with German logistics provider, Schnellecke, to focus on in-plant logistics in China.

CDC also provides the returnable racks used to containerise Volvo S90s to Zeebrugge by rail. “For the Volvo project alone, we have invested around 80m yuan. Around 50m yuan of that is for the vehicle racks, another 20m yuan for a warehouse in Daqing where the container loading happens, and another 10m yuan on varied equipment and systems,” says Synnes. 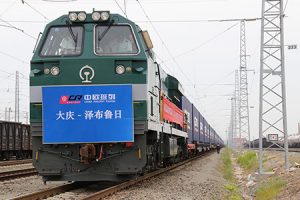 Changjiu has established rails links from Harbin, China, to Russia and is the first company to provide a direct rail service for Chinese-built vehicles to western Europe, with a contract to ship Volvo S90s

Synnes says Changjiu still has quite a lot of cash to invest after its IPO last year and building the company’s logistics infrastructure in Europe, where it set up new European headquarters in Hamburg earlier this year, is a priority. Its ‘4+1 Strategy’ plan for Europe will establish four consolidation and distribution centres in the north, east, south and west of Europe – in the Polish capital Warsaw, Wilhelmshaven in Germany, Zeebrugge in Belgium and Milan, Italy.

The plan is to provide services for vehicles and parts from all locations. The company already has a rail route to Hamburg and Duisburg in Germany, as well as to Zeebrugge, working with HAO International Logistics. It is currently working on the route to Milan.

Changjiu has also established rail links from Harbin, China to Russia. The service between Harbin and Yekaterinburg, Moscow and St Petersburg was set up in the summer of 2016 and, while the Russian market has been suffering over the last few years, there are signs of renewed demand from customers in Russia, according to Synnes.

The 20-hectare Zeebrugge centre will be Changjiu’s main automotive logistics centre for imported parts and finished vehicles from China, vehicle export from Europe to China by rail and ocean, as well as intermodal services for French and British carmakers.

The Wilhelmshaven facility, meanwhile, will operate as a regional distribution centre for parts imported from China to German OEMs and packing products for suppliers exporting parts to China from Europe. It will also provide storage for parallel vehicle exports to China via train and ocean vessel.

In Poland, Changjiu will consolidate and pack parts for suppliers in eastern Europe, and establish a distribution centre for imported parts and vehicles from China. The 40-hectare site will act as a container crossdock to combine freight from other terminals.

Finally, the southern centre, in Milan, will consolidate and pack parts made in Italy for export to China as well as distribute parts coming in the other direction. It will also feature a vehicle distribution terminal.

According to Synnes, there is already a lot of traffic going through Poland and Germany, and it remains to be seen whether Changjiu will build on the existing routes or set up new ones to fulfil the ambitions of the 4+1 Strategy. 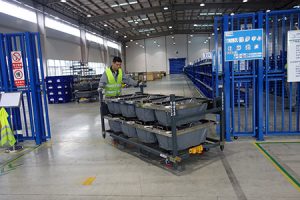 CDC International has set up four other subsidiaries, one of which provides packaging services for Chery, Jaguar Land Rover and Mazda

Bo Shijiu adds that it was important for the company to establish an international business because it matched with the company’s strategic development and expansion plans, and it would “help domestic Chinese enterprises build an international logistics platform”.

Road to the world If the last 20 years of automotive logistics in China have been all about facilitating domestic growth, the next 20 could see those connections grow considerably around the world. At the Belt and Road Forum for International Cooperation held in Beijing in May, for example, China’s president Xi Jinping announced investments of $124 billion to further develop transport and logistics links across the ‘New Silk Road’.

Chinese logistics providers such as Beijing Changjiu are firmly on the path to more advanced services and operations in support of these links and Bo Shijiu believes the company is on target to expand service offerings in China and globally. The company’s investments in rail and ro-ro vessels and its search for new markets – not to mention ambitions for mergers and acquisitions – suggest it could be among the first Chinese logistics providers to gain a solid international footing. If many in the industry around the world haven’t heard about it yet, they likely will soon. 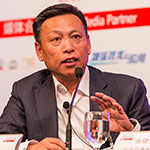