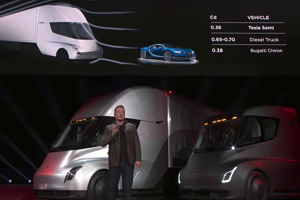 Tesla founder Elon Musk unveiled the Semi Truck – a Class 8 truck he has nicknamed 'The Beast', which is claimed to have a range of 800km at maximum weight at full highway speed – at an event in California last week. Its battery can be recharged in 30 minutes to go 640km.

Production is scheduled to start in 2019.

JB Hunt plans to deploy the electric tractors to its Intermodal and Dedicated Contract Services divisions to support operations on the West Coast of the US.

“Reserving Tesla trucks marks an important step in our efforts to implement industry-changing technology,” said John Roberts, president and chief executive officer at JB Hunt. “We believe electric trucks will be most beneficial on local and dray routes and we look forward to utilising this new, sustainable technology.”

Girteka Logistics, which delivers more than 300,000 full truckloads a year, claimed to be the first European company to order the new truck.

“Today Elon Musk revealed the future of trucking by announcing 'The Beast' and we want to be first in line to take ownership in Europe. We currently have a fleet of almost 4,000 trucks in Europe and 'The Beast' will be our first electric truck,” said Edvardas Liachovicius, CEO of Girteka Logistics.

The new vehicle is said to be able to accelerate from 0-100kph in just 5 seconds when empty and in 20 seconds when fully laden.

It is run by four independent motors on each of the rear wheels, which Musk said meant the truck would not break down for a million miles.

“We are guaranteeing it won’t break down because it has four independent motors. You could break two of those motors and the truck will still keep going,” he said.

“Even if you break two of the four motors, it will still beat a diesel truck,” he added, referring to the new vehicle’s acceleration performance.

Tesla previously delayed the official launch of the truck from the end of October to mid-November, due to delays in ramping production of its Model 3 production car.

At the same event last week, Tesla also revealed a new Roadster sports car, claiming it to be the fastest car ever, with an acceleration rate from 0-100kph of just 1.9 seconds.