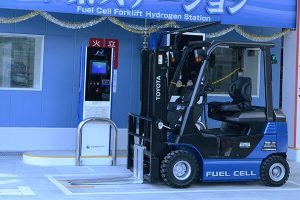 The largest parts warehouse run by Toyota Australia has been officially opened at Kemps Creek, New South Wales. It is located on 6.4 hectares close to a network of motorways and major arterial roads in the Western Sydney conurbation.

The new Toyota Parts Centre (TPC) will house more than 128,000 parts and ship around 27,000 components daily, the company said.

The work area covers more than 50,000 sq.m and features a range of safety measures, including low-level storage systems that eliminate the need for employees to work at height to reach parts.

“It will also include full separation of man and machine to build in safety, as well as the first use of a fleet of autonomous intelligent vehicles to reduce manual carrying of parts,” stated Toyota Australia.

A total of 2,200 solar panels were installed on the warehouse’s roof as part of Toyota Australia's plans to reduce the site’s emissions to zero by 2020.

The Western Sydney TPC also marks Toyota’s first trial of hydrogen-powered fuel cell electric forklifts outside Japan. The company is already phasing these in at the Motomachi assembly plant (pictured), with the intention of deploying 170 to 180 by around 2020.