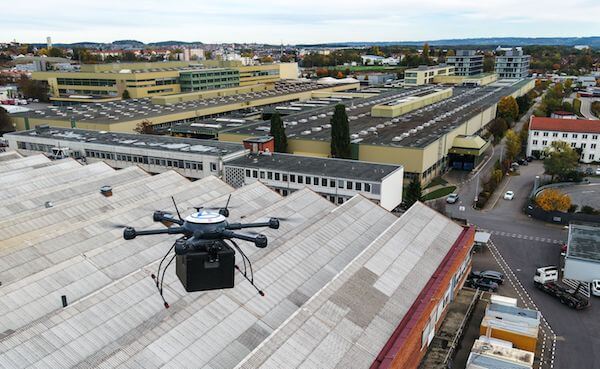 Component manufacturer ZF has started testing the use of a drone to distribute parts at its main plant in Friedrichshafen, south-west Germany.

The prototype is being used to transport spare parts such as sensors and control cards from the plant’s central warehouse to various workshops, with the aim of proving that such flights are both possible and safe. Its use is expected to reduce ground traffic at the plant and save time on delivery routes that are up to 1km and serve destinations on the upper floors of some buildings.

ZF, which makes driveline and chassis systems as well as active and passive safety technology, said it was the first company in Germany to receive official approval for automated drone flights over factory premises.

The six-motor drone can handle a payload of 3kg, which ZF said was sufficient for the vast majority of spare parts and tools it needed to move around the site.

“With approvals for automated drone flights from the Stuttgart Regional Administrative Authority and the German Air Traffic Control (DFS), we can accelerate logistics processes in the plant and at the same time strengthen our technological leadership position,” said head of ZF’s commercial vehicle technology division, Fredrik Staedtler.

The division’s supply chain management chief, Matthias Haberstroh, added: “We still need to make some adjustments to achieve a completely smooth flight before our delivery drone can be permanently integrated into the logistics process chain.

“The transport system was extensively tested by our supplier, but we still had to further test a number of different navigation sensors on site in Friedrichshafen which ensure precise positioning between the plant halls,” he added.

ZF said safety was a top priority when transporting goods by drone. The test unit can travel at 30kph and flies mainly over the roofs of plant buildings, only crossing driveways and pavements where there is no alternative.

Up to now, drones, which are mostly equipped with cameras, could only be used commercially for mapping, monitoring factory fences or surveying. But in the mid-term, other companies could use delivery drones industrialised by ZF on their premises, the company suggested. Longer-term, delivery drones could also be deployed outside protected factory premises to support couriers and other parcel services in their deliveries, it added.

Last month, Škoda revealed it had begun trialling an autonomous drone in the Czech Republic to identify and count containers outside its Mladá Boleslav factory, with the intention of making drone-assisted stocktaking a regular feature of operations in the medium term.