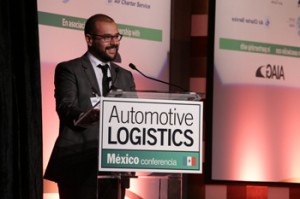 The use of short-sea shipping to move vehicles within North America still tends to be more of a fallback option for carmakers when there are capacity issues on the other modes such as rail, rather than as a regular service. But before shipping lines can offer more frequent sailings, investments in Mexican ports and their inland connections will be necessary.

“Short sea is still the emergency cord that you pull when there is a railcar shortage,” said Robert Zavala (pictured left), head of Mexico at Wallenius Wilhelmsen Logistics, speaking at last week’s Automotive Logistics Mexico conference, pointing to both a lack of scale and longer lead times compared to rail transport.

However, Zavala, along with other executives from major carmakers, have expressed concern that rail capacity will become tight in Mexico as volumes grow. WWL, as well as providing sea services, is a major yard operator in Mexico, and manages rail flows for a number of carmakers including Nissan.

“We will need extra 2,000 more railcars in addition to what we currently have in Mexico,” Zavala pointed out. “The question is that really going to happen? Will there be time to build that number of rail cars to meet the needs?” he asked.

However, even with capacity concerns for rail, the short sea option faces a number of issues. One is that the North American market does not tend to use specialised, smaller ships for short-sea flows in the way that is common in Europe. Instead, shipping lines add port stops onto larger global routes between the Americas, or with Europe and Asia. “In Europe, [short-sea transit time] is measured in hours, not days. In North America, it is measured in days not hours,” said Zavala.

However, Zavala added that the government should commit the necessary money to develop infrastructure at the ports as well as the rail connections to support these flows. He pointed to the urgency of such investments, with vehicle exports out of Mexico likely to grow by more than 1m units over the next five years.

“The investment required for terminal developments is still pending,” said Zavala. “In Mexico there are no specialist ro-ro handling terminals for vehicles. There have always been investment plans but we don’t see them materialising in time to meet the growth in this industry.”

Efforts are being made at the port of Veracruz to develop dedicated terminals with more efficient multimodal links, however other OEM executives share Zavala’s concerns about the speed of development.

“Port capacity is one of our biggest worries, including the lack of berths to receive larger vessels,” said Rafael Lopez, director of material planning and logistics at Ford Mexico.

“There is an expansion plan for the port of Lázaro Cárdenas, and a new terminal is being built in Veracruz, while we also have a plan for the south,” he said. “A lot of money is being committed to infrastructure for the remaining four years of this administration.”

Whether the investments will be enough to help short-sea shipping develop as a more frequent service for vehicle transport remains to be seen. However, there are early signs the shift Zavala was calling for is under way.

WWL has increased its services, including a new route out of Altamira on the west coast north of Veracruz to serve carmakers that include General Motors. MOL has commenced regular services from both Veracruz on the east coast and Lázaro Cardenas on the west coast, serving both Honda and Mazda. Höegh Autoliners has also increased services, and has recently opened a new sales office in Mexico.

Meanwhile, last year, Ford and Chrysler both increased the vehicles they are moving out of Mexico, although some of this was still on a ‘spot’ basis.