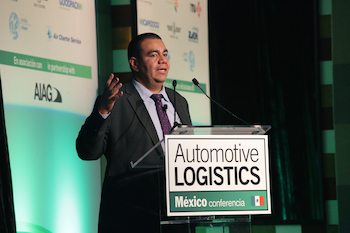 While carmakers in Mexico continue to voice their concerns over the adequate provision of rail services, the country’s biggest rail provider, Ferromex, has said it will have the capacity to support the demands of increased production in the country, which is forecast to hit 5m by 2020.

Since the rail industry in Mexico was privatised in 1995, Ferromex has invested $8 billion in its network, and continues to reinvest 27% of its revenue  in infrastructure annually, the highest among North American railways. It will invest a further $5 billion over the next five years, including $500m in automotive, according to Alberto Sanchez, assistant vice-president of the automotive business at Ferromex, who was speaking at this week’s Automotive Logistics Mexico conference in Mexico City.

“The evolution of investment in rail in Mexico shows where we are going and how we will answer the infrastructure issues,” said Sanchez.

The company now provides services along 7,108km of main track with direct services to the US border at five different locations as well as serving eight ports. In addition, Sanchez announced that it is increasing its services at the border with new projects running from Monterrey and Silao.

Ferromex has around 800 locomotives, and has recently increased its multilevel fleet for moving vehicles by 950 wagons, a growth of almost 60%. It currently has a rail market share of 65% and the automotive sector accounts for 13% of its revenue, the biggest sector after agribulk.

That 13% share translates into the movement of 1.65m vehicle units based on last year’s figures. According to Sanchez, Ferromex moves around 70% of the vehicles made in Mexico.

Nissan, which is Mexico’s biggest carmaker customer, moves 70% of US-bound vehicles by rail and uses Ferromex services from its facilities in Aguascalientes across the border at Eagle Pass and El Paso (along with Ferromex’s rival, Kansas City Southern de Mexico, which moves volumes for Nissan across the border at Laredo).

“Without rail, Mexico would not be able meet the needs of the automotive industry in terms of transport,” noted Sanchez. “One of the main advantages for the automotive sector is how we have evolved to take the share we have. Most automotive plants have direct access to rail.”

Nevertheless, fears that OEM production will outpace the growth in services persist. “We need at least 2,000 more railcars in addition to what we have today as production rises,” said Roberto Zavala, head of Mexico for Wallenius Wilhelmsen Logistics, which manages a large amount of rail services on behalf of Nissan and others. “Is that really going to happen? We are concerned.”
“What keeps us up at night? First off it is rail, especially border capacity and congestion,” said Alfonso Rodriguez, Mexico vehicle logistics manager at General Motors. “This also increases risk for vandalism and theft, including for tyres, batteries, key fobs and even tailgates.”

There are also concerns over the costs of rail services, both in terms of inbound and outbound services. BMW’s Alfredo Monroy, global sourcing and supply chain manager, who said that the cost versus lead time did not add up for its inbound needs for moving material from the US. The company announced last year that it will be opening a $1 billion plant in San Luis Potosi in 2019 and Monroy said that production there would be supported by inbound volumes of engines and transmissions, which would be better managed by another intermodal service.

Sanchez said that the high capacity rail wagons it had invested in made its rail service more cost effective than the alternative modes but also highlighted that it was a strong part of the intermodal network.

Asked about the problems with security on the rail network, Sanchez admitted that it had been an issue but was one that Ferromex was dealing with, spending millions to protect the cargo it was carrying for the automotive industry and working with government on a joint strategy to solve the issues that threaten quality.