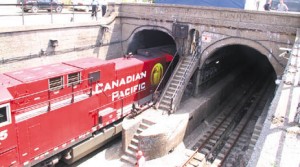 A project to build a new, larger train tunnel under the Detroit River able to handle double deck container traffic, as well as finished vehicle shipments, has taken a step closer to realisation with the approval of a $10m contribution by the Michigan Department of Transportation.

A report in the Detroit News reveals that the sum was approved by a joint House-Senate conference committee under the proviso that the US and Canadian governments make their own contribution, which amounts to $200m. An equivalent figure has already been pledged by Continental Rail Gateway, a coalition formed between the Windsor Port Authority, Borealis Infrastructure and Canadian Pacific Railroad in June 2010.

The Continental Rail Gateway project will build a single-track tunnel between Detroit and Windsor large enough to carry trucks and SUVs from US and Canadian automotive plants.

The high clearance tunnel is expected to cut shipping costs for customers, which currently often reroute train shipments of Michigan-made vehicles south through Ohio, Pennsylvania and New York to reach eastern Canadian ports. Other trains have to unload containers in Detroit or Windsor and move the goods across the international border by truck according to Tim Hoeffner, director of the state Department of Transportation’s Office of Rail, who was quoted in the report.

The existing two rail tunnels under the Detroit river were built in the 1900s are not large enough to handle larger finished vehicle or double-stack container trains.

Canadian Pacific Railway operates the existing rail tunnels and jointly owns them with Borealis Infrastructure. They currently handle 25 freight trains each day and 400,000 train cars pass under the river annually.

Officials have estimated the new 1.6 mile (2.5km) tunnel would take up to two years to complete and will be built about 150 feet to the west of the one that opened in 1909.