Kerry Logistics has announced that its subsidiary, KLN (Singapore) has been awarded a concession to operate inland ports in Yangon and Mandalay, both major commercial ports in the South East Asian country of Myanmar. The ports were previously managed by the government. 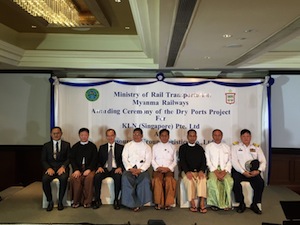 According to Kerry Logistics, the Myanmar government is keen to develop its rail network to support mass cargo transport within the country. A statement by Kerry Logistics said that the inland ports at Yangon and Mandalay would serve as container and cargo terminals linked by railway to major routes in the country, and as hubs for the exporters, importers and domestic logistics service providers of cargoes in and out of Yangon and Thilawa Ports. The inland terminals will also handle cross-border cargoes from neighbouring countries such as China and Thailand.

“We would like to thank the Ministry of Rail Transportation of Myanmar for its trust in us, and are pleased to be offered the opportunity to contribute our expertise in terminal logistics operations to benefit the development of Myanmar,” said George Yeo, chairman of Kerry Logistics. “Railway transportation is an essential backbone in support of Myanmar’s economic development, both within the country and with nearby regions. Given Kerry Logistics’ presence in ASEAN, our goal is to further strengthen the linkage among countries in the region and seek accelerated growth by developing an integrated Greater Mekong Region platform covering Thailand, Cambodia, Myanmar and Laos.  The inland ports in Yangon and Mandalay form a vital part in pursuing such an integration.”

There have been a number of developments specifically related to the automotive industry in Myanmar over the last couple of years. Nissan established local production there with Tan Chong Motors last year. The Japanese carmaker is reported to have a five-year distribution deal with Tan Chong Motors. Meanwhile, marine logistics providers NYK and WWL have both signed joint ventures in the country for the provision of finished vehicles distribution services.

Ford has also set up a dealership in Yangong for the sale of vehicles imported from its global production facilities in North America, Europe and Thailand.

Kerry’s partnership with the rail ministry in Myanmar is expected to create 400 jobs and facilitate industry expertise sharing in the country.