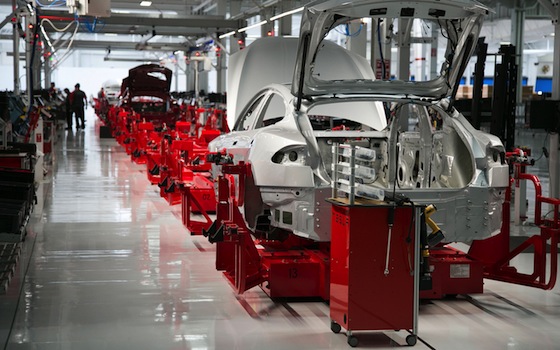 Tesla has ruled out southern New Mexico or western Texas as hubs for its new automotive battery factory. Based on earlier reports this now leaves San Antonio in Texas, as well as the states of Arizona and Nevada in the running as rival locations for the company’s $5 billion plant, which is planned to produce up to 500,000 lithium ion packs annually by 2020. Tesla has not confirmed when it will make the final announcement.

The news will come as a blow to the southern New Mexico and western Texas regions given that the factory’s output is expected to be greater than current combined global production and would have meant the employment of 6,500 workers.

Texas was considered a strong contender for the factory, with its long history of wind farming and extensive research into renewable energy. However, it has banned the direct sale of Tesla electric vehicles to customers throughout the state, as has Arizona (see below).

This leaves Nevada as a strong contender for the site, with Greentech Media reporting on its Reno-Stead airport, which offers a large development space and the potential to develop rail links.

In early March, Tesla officials confirmed the decision to create what it termed a ‘gigafactory’ in a southern US state. With construction set to start later this year in time for production commencement in 2017, the short-list is expected to be imminent.

Tesla plans describe a 100,000 sq.m main plant that will be powered by wind and solar energy, making it one of the largest, most environmentally-friendly plants in the world.

In 2013, the carmaker sold almost 22,500 vehicles, with a view to increasing this to 35,000 over the course of 2014. As production grows over the coming years, Tesla is hoping to significantly reduce costs for the electric car and increase its presence as a viable alternative to traditionally powered vehicles.

States object to direct sales
Tesla has stores in 21 states and the District of Columbia but those stores have no sales people. Instead customers peruse the models on display and then order their choice online. New Jersey, Arizona, Maryland, Texas and Virginia have banned or limited these kinds of transactions in a move designed to force sales through traditional dealerships.

“Moreover, it is much harder to sell a new technology car from a new company when people are so used to the old,” said Musk in an open letter to customers in New Jersey, the latest state to ban Tesla’s direct sales initiative. “Inevitably, they revert to selling what’s easy and it is game over for the new company.”

He went on to state that there was an even bigger conflict of interest at the dealerships given the revenue generated from aftermarket services, something that he said electric vehicles had less need for.

“There are no oil, spark plug or fuel filter changes, no tune-ups and no smog checks needed for an electric car,” said Musk. “Also, all Tesla Model S vehicles are capable of over-the-air updates to upgrade the software, just like your phone or computer, so no visit to the service centre is required for that either.”

Customers in New Jersey are still able to order Tesla vehicles online for delivery there.