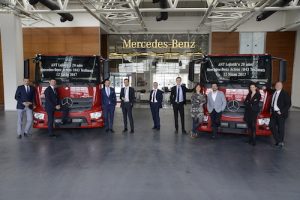 The Turkish division of German carmaker Mercedes-Benz – Mercedes-Benz Türk – has signed a deal with domestic finished vehicle logistics provider ANT Lojistik for the delivery of cars to dealerships across the country.

Under the contract, which will run for a five and a half years, ANT will be the sole provider of outbound logistics services for Mercedes-Benz and Smart passenger cars, as well as light commercial vehicles, from their arrival in Turkey to dealer delivery. The contract covers movement from the ports to ANT’s vehicle warehouses, the provision of pre-delivery inspection and storage services, and final delivery.

ANT Lojistik expects to handle as many as 40,000 Mercedes-Benz vehicles a year under the new contract, which will begin in June. It is the biggest contract the car carrier has had with Mercedes-Benz and the logistics provider is making a €7m ($7.4m) investment in its truck fleet to support it, purchasing an additional 50 car carriers this year, at least 40 of which will be supplied by Mercedes-Benz Trucks. The first 20 of these were due to arrive today (April 12th) with the rest in the second half of the year.

The 40 new trucks – all Mercedes-Benz Actros 1843 models at Euro 6, with transporter trailers supplied by French manufacturer Lohr – will join ANT Lojistik’s current fleet of over 100 car carriers. It’s not yet clear who will be supplying the remaining 10 vehicles. Scania and Renault are also current truck suppliers to ANT Lojistik, however.

“With the newly signed Mercedes-Benz contract, the investments in our car carrier fleet will continue,” said Ceren Eker Güven, deputy general manager of ANT Lojistik. “We will extend our fleet up to 155 car carriers by the end of 2017 and serve Mercedes-Benz Türk in our two compounds located in the Izmit area. We will act for Mercedes-Benz Türk as a boutique service provider who is fast at communication, has full control of all operations and is open to developments at all levels of service.”

The new Mercedes-Benz volumes add to ANT Lojistik’s existing contracts with Hyundai, Toyota, Suzuki and Temsa (Mitsubishi). The company will also start export shipments for another carmaker next month under a new contract, according to Güven. Further details of that contract are expected shortly.