Opel to boost Holden-badged exports to Australia and NZ 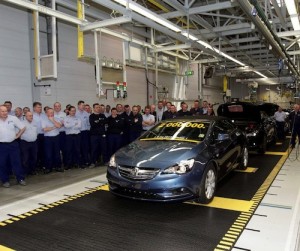 GM’s Opel division has produced the two millionth car at its facility in Gliwice, Poland. The vehicle – a Cascada convertible – is being shipped to Australia where it will be badged under the Holden brand as part of an arrangement set up in February this year in which Gliwice is producing models for export to Australia and New Zealand. The plant will also be making the Cascada for the North American market toward the end of this year, which will be sold as a Buick model there.

"The two millionth car produced by Opel in Gliwice is the symbolic opening of the next phase of development of our plant, which will be complemented by the launch of the new generation Opel Astra later this year,” said Andrzej Korpak, GM Manufacturing Poland managing director.

The Cascada is one of four vehicles being exported from GM’s European plants to Australia to be sold under the Holden badge this year. The others are the Astra VXR and Astra GTC, also made at Gliwice, as well as the Insignia VXR, which is being made at the Rüsselsheim plant in Germany. All vehicles will be shipped from the port of Antwerp by Höegh Autoliners.

“Astra, Cascada and Insignia are renowned in Europe for their performance credentials and premium execution, making them the perfect addition to Holden’s range as we continue to offer more choice for our customers,” said Bill Mott, executive director of marketing at Holden.

Holden announced a major new vehicle launch programme at the beginning of this year in which it committed to delivering 24 major vehicle launches and 36 new powertrain combinations over the next five years, while confirming one-third of the brand’s future models will be sourced from Opel Europe.

A spokesperson for Opel told Automotive Logistics that the company wanted to “intensify the cooperation with the other GM brands” in the coming years and that the production of Holden vehicles played an important part in that strategy. The company would not disclose any planned volumes or production forecasts stating it was still in the ramp up phase.

GM announced in 2013 that it was ending vehicle and engine manufacturing in Australia by the end of 2017.

*In other news, Fiat Chrysler Automobiles is reported to be exporting its Dodge Ram brand pick up trucks to Australia and New Zealand by the end of this year. The company did not provide comment on volumes or from the where the vehicle would be supplied but is reported to have signed exclusive rights to an unnamed local distributor for conversion and distribution of the vehicles.