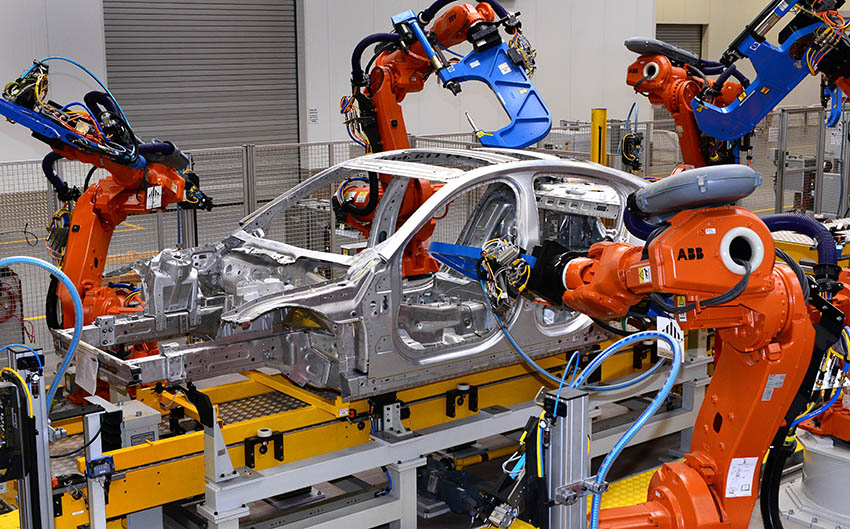 Aluminium has been threatening to edge steel out as a material for automotive components thanks to its weight advantages. But while aluminium’s role in components is growing, modern steels still dominate the supply chain – and the future requires the best of both

Slowly, but surely, steel’s dominance as the major material used in the making of vehicles is being eroded by lightweight aluminium. The catalyst is the drive to lower the weight of vehicles to help reduce emissions. But any thought of aluminium replacing steel in the automotive supply chain in the top spot may be wide of the mark.

The steel-to-aluminium ratio in modern vehicles is still at least five to one and unlikely to change significantly in the foreseeable future. Some parts that were once steel and subsequently switched to aluminium have even switched back, thanks to the lighter, stronger varieties of steel on the market. Industry analysts tell Automotive Logistics that there will be plenty of steel moving through the supply chain for years to come.

Car engineers and designers are also more familiar with steel. “Due to its high strength and safety concerns, steel has been the backbone of a vehicle, with usage in body structure, doors, panels, and trunk closures for strength and energy absorption during accidents,” says Technavio analyst, Badala Jaganatha Chandrakumar. Changes to vehicle platforms to include new body materials also require expensive changes to tooling, costs for which can multiply through the supply chain.

[sta_anchor id="1"]Still, new types of steel, as well as aluminium in some segments, are reshaping the materials supply chain across multiple tiers, from supplier locations and factories to how logistics supports inbound and reverse supply routes.

Rising usageAccording to industry consultants, Ducker Worldwide, the average amount of aluminium per passenger vehicle in North America in 1995 was 90 kilos (200 pounds), while by 2005 it had risen to just above 135 kilos; it is currently around 175 kilos. At the same time, the average kerbweight (the weight including standard equipment, fuel and oils) of a North American light vehicle has fallen from 1,703 kilos in 2008 to 1,699 in 2015, despite a shift towards light truck and SUV sales. Ducker forecasts a further fall to 1,592 kilos by 2025 to meet anticipated emissions requirements. 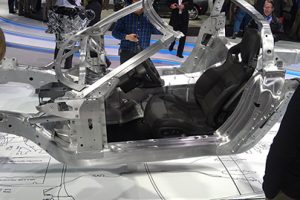 An aluminium chassis for a 2014 Chevrolet Corvette

The Michigan-based consultancy had previously forecast aluminium usage would reach 225 kilos per vehicle in the same timeframe but because of changes in planned new model releases and proposed alterations in emission regulations by Washington’s Environment Protection Agency – which could change even further following the election of Donald Trump – it is currently reviewing this.

What’s clear, says Ducker metallurgist, Richard Schultz, is that steel’s current portion of 55% will decline and aluminium’s 11% will go up.

The impacts of this shift can be seen in supplier investments and locations. One of many examples is Netherlands-based Constellium, which in autumn 2016 opened a new aluminium sheet rolling plant in Bowling Green, Kentucky, together with Japanese partner UACJ. With an annual capacity of 100,000 tonnes, the plant will supply closure panels and body structures. It is part of a global push to meet rising aluminium demand by Constellium, which in October inaugurated a new aluminium rolling, finishing and recycling line at its Neuf-Brisach plant in Alsace, France.

Mass appealAll of which is music to the ears of the aluminium industry. Doug Richman, who heads the Aluminum Association’s Aluminum Transportation Group (ATG) technical committee, says: “Currently, aluminium is the leading material in powertrain and wheel applications and it is quickly gaining market share in hoods [bonnets], trunks [boots], doors and bumpers. Aluminium is an attractive metal for light-weighting strategies. No other material can safely reduce as much total mass.”

But the steel industry is responding by designing lighter varieties of steels, such as advanced high strength steel (AHSS). For the near-trillion dollar steel industry – which has been beset by financial problems in many parts of the world – there is a lot at stake as the automotive industry buys around 13% (208m tonnes) of the 1,600m tonnes or so of steel produced each year. 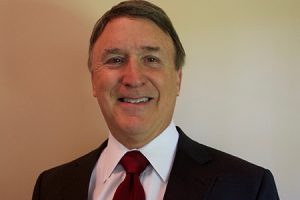 “We foresee a continuing growth of AHSS,” says Russ Balzer, technical director of WorldAutoSteel. “Research currently shows that only 15% of the steel in a car is AHSS; consequently, there is still abundant room for additional mass savings.”

Technavio’s Chandrakumar predicts that advanced high-strength steels will enable vehicle producers to reduce vehicle weight by 25-39% compared to traditional steels. That would save up to 4.5 tonnes of greenhouse gas emissions over the lifecycle of a vehicle – as well as contributing to savings during transport and distribution of vehicles.

Dr Jody Hall, vice-president of the automotive market of the Steel Market Development Institute in the US, says modern steels are ten times stronger than those used in the 1970s and there’s been a 25-30% reduction in mass since the 1990s. Her colleague, senior director Dave Anderson, gives the example of a modern steel chassis designed with a 34% saving in weight, so that it is equal to an aluminium version.

Such advances do not come quickly into the supply chain, however. Two years of conceptual design work and three [sta_anchor id="3"]years of engineering work, says Hall, are not unusual before a new part goes into commercial production as an automobile component. Model redesigns take a similar amount of time before coming off the production line, confirms Ducker’s Schultz.

A partnership, not a fight?Even if aluminium is taking a bigger share of a traditional market for steel, it would be wrong to see such developments as a fight, says WorldAutoSteel’s Balzer.

“While competition between steel and aluminium is often referred to as a battle, if you look at the bigger picture, we are all – suppliers and OEMs – very much involved in a multi-stakeholder effort to find the best solutions,” Balzer says. “Some of these solutions may be aluminium, but many more will be steel.”

Richman of the Aluminum Association describes the situation for materials sourcing at carmakers as an ‘all-of-the-above’ approach. Aluminium, steel, carbon fibre and plastics will continue to all come together in the same vehicle. He cites the Cadillac CT6, BMW i3, Chrysler Pacifica, Chevrolet Malibu and Audi Q7 as examples.

Ducker predicts that extensive use of aluminium and high-strength steels will be required to remove 68-90 kilos from the average auto body with closures by 2025. To remove more will require aluminium to be used for over 20% of the parts.

[sta_anchor id="4"]Technavio’s Chandrakumar foresees no scenario in which all-aluminium would replace steel applications. “However, we have seen wide adoption of an all-aluminium body concept in the premium car segment, which is likely to continue,” he says.

Putting the brakes onThere are factors that can put the brakes on swapping from steel to aluminium. John Kovacs, a senior economist at Capital Economics in London, explains that aluminium is more expensive than steel and factories need to be retooled to handle aluminium. “This is a significant investment cost, not so much the case for smaller aluminium components as for entire bodies,” he comments.

Verdict Retail’s senior analyst Richard Brown says aluminium is also more difficult to work with; it is harder to weld, and it has a lower fatigue index than steel. As Kovacs underlines, fastening technologies are less well-established in aluminium than in steel.

On top of all that, says Chandrakumar, steel has the weight of proven usage behind it, as well as a record of high safety and optimised vehicle designs.

Whether the balance between aluminium and steel will be dramatically affected by increased production in the future of hybrid and all-electric vehicles is, so far, unclear.

Verdict Retail’s Richard Brown says the move could boost the use of aluminium in an attempt to compensate for the heavy weight of current electric batteries and thus increase vehicle range. “Until batteries become smaller and more power-dense, the use of lightweight metals like aluminium is a good strategy,” he says.

ATG’s Richman suggests that using more aluminium to make alternatively-powered vehicles lighter means they can get away with smaller, lighter batteries or fuel cells.

But new breeds of car also need to be affordable, says WorldAutoSteel’s Russ Balzer, who points to steel’s cost competitiveness versus aluminium as an advantage.

Richard Schultz of Ducker is dismissive of both hybrids and all-electrics, however, saying they will not be seen in significant numbers on the roads of the US while petrol prices remain so low. From market penetration approaching 5% two years ago, they are now down to 3%, thanks to cheaper fuel.

However, lighter vehicles help carmakers meet tougher CO2 regulations of the kind being introduced all over the world, and many see aluminium as a means to improve fuel consumption.

“Aluminium is proven to be the most cost-effective way to achieve the mass reduction necessary to meet future targets,” says Richman of the Aluminum Association.

WorldAutoSteel’s Balzer adds: “Steel is the least greenhouse gas-intensive material used in automotive structures, and is the only material that lowers greenhouse gas emissions in all phases of a vehicle’s life cycle.”

In the US, current regulations are set to wave a big stick at carmakers: fines of $140 from 2025 onwards for each vehicle produced – up from $55 in 2015 – for each mile per gallon by which its overall fleet exceeds the target figure, points out Ducker’s Schultz. That target has been 54.5mpg, and while the EPA recently confirmed it in a review, a Trump administration may loosen the targets. 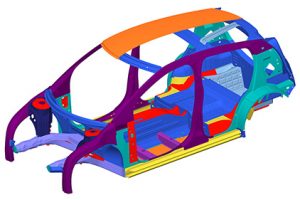 However, reducing fuel consumption is a global initiative, and reducing vehicle weight is seen as the biggest contributor to achieving these targets. Thus, aluminium looks set to make yet further inroads into automotive manufacturing – and therefore, of course, the supply chain that supports it. 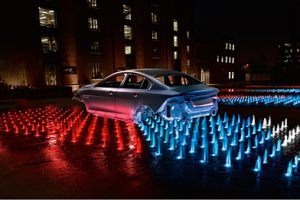 The ease with which aluminium can be recycled is another factor encouraging its take-up.

The operation, which covers 15 different points between re-melt, processing, smelting and warehousing across New York state, Ohio, Illinois, Michigan and Canada, moves over 20,000 shipments of work-in-progress, finished aluminium or manufacturing scrap every year, allowing the retention and reuse of the 30-40% of aluminium waste previously sold for recycling elsewhere.

Setting up the operation involved Penske’s logistics arm working with its truck leasing business to specify a universal trailer that could haul finished coils and ingots ready for stamping as well as shredded scrap on return loads to processing and re-melting locations.

In the UK, meanwhile, Novelis has established another closed-loop recycling network to recycle scrap from aluminium stamping for Jaguar Land Rover, helping it to reclaim more than 50,000 tonnes of scrap a year. At a presentation on the move, JLR group leader of sustainable aluminium strategies Adrian Tautscher said replacing steel with aluminium had become a central part of the company’s strategy to increase fuel efficiency and lower carbon emissions.

The operation involved an investment of more than £7m ($8.5m) across three JLR press shops to install segregation systems to capture and distribute the scrap, with further investments by nine external suppliers in their own press shops.

Tautscher said JLR’s investment was paid back in just over a year, with the recycled material being significantly cheaper. “We wouldn’t be increasing the amount of aluminium and recycled aluminium [in our cars] if there wasn’t a sound business case,” he commented.