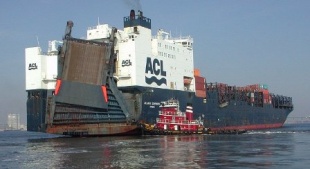 Peel Ports Group is making in £10m ($16.7m) investment at the port of Liverpool in the UK to create a dedicated vehicle storage area with a capacity to handle 70,000 vehicles a year, as well as widening the passage which gives access to the port’s Seaforth Dock for larger vessels.

The announcement comes in response to the news that Atlantic Container Line has chosen Liverpool as the UK port of call for its forthcoming fleet of five G4 con-ro vessels, which have greater capacity for both containers and vehicles, and will operate on its North Atlantic service between the UK and North America.

ACL is reported to have chosen to extend its contract with Peel Ports for ten years following a review of potential schedules, market potential and opportunities for the North Atlantic services. The ocean forwarder has been calling at Liverpool since 1969.

“Our relationship with ACL is an extremely positive one and we’ve worked very closely with their team on our investment programme to significantly reduce transit times through the dock system, accommodating the significant extra volumes and new operating systems that the new fleet will require,” said David Huck, port director, Port of Liverpool.

ACL offers five transatlantic sailings each week and also markets the Grimaldi Lines direct ro-ro/container service between the US and West Africa. The company also offers service for non-containerised cargo from North America to the Mediterranean, Middle East, South Africa, Australia and the Far East.

The port of Liverpool already handles volumes for VW Group, Jaguar Land Rover, Gefco, the IM Group and Ford. Last year it handled a total of 16,000 vehicles with the majority made up of imports (12,300). While comparatively small compared to other UK ports such as Southampton or Tyne, those figures showed an 84% increase on 2012.

G4 con-ro capacity
ACL has the five new G4 con-ro vessels currently under construction with Hudong-Zhonghua Shipbuilding in China. Each has a container capacity of 3,800 TEU, compared with 1,850 TEU for ACL’s five current G3 ships. In addition they will have 764 TEUS of ro-ro space against 525 TEUS now and space in the car decks for 1,307 vehicles against 1,000 now.

Four of the vessels will be delivered in the middle 2015 with the fifth vessel due in service by early 2016.

According to Peel Ports, the vessels have been designed to go through Liverpool’s Gladstone lock as the ro-ro operations are most efficiently managed on the flat water of the enclosed Seaforth Dock. They will not be using the new in river berths currently under construction at the £300m Liverpool2 deep-sea container terminal, which will accommodate new post-Panamax vessels.

As well as the additional space being developed for vehicle storage, throughput will be supported by inland waterways services via the Manchester Ship Canal. A container shuttle service will move in the region of 20,000 containers across a distance of 40 miles (64km) between the ports of Liverpool and Manchester in the coming year according to Peel Ports. That volume is set to increase in 2015 when Liverpool2, Peel Ports’ landmark deep-water terminal, becomes operational.