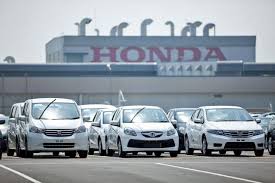 Honda is delaying the construction of its third car assembly plant in Thailand because of political unrest in the country. The decision will push back the carmaker’s plans for distribution to the local and wider Asean markets from the $530m plant by at least six months, according to reports by the Wall Street Journal last week.

Thailand’s third Honda plant had initially been seen as a positive response to demand for vehicles among the country’s growing middle class. Construction of the plant was meant to have begun this spring, with an eventual annual capacity built in for 120,000 cars. This would have meant Thailand’s overall output was raised to 420,000 by 2015, producing vehicles for export to Southeast Asia, Oceania and the Middle East, as well as domestic sales.

Political uncertainty has also prevented some carmakers from launching new models in Thailand, with a drop in consumer spending taking its toll on the supply chain. Thailand has a goal to produce 3m cars by 2017, a figure which may be undermined despite its central position in the southeast Asean region.

Anti-government protests, aimed at removing the amount of influence held in the country by former president Thaksin Shinawatra, have flared up since the latter part of 2013. In November last year, anti-government protesters were responsible for the temporary closure, without police intervention, of several government offices.