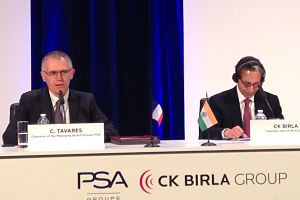 French carmaker PSA Group and India’s CK Birla group have revealed plans to invest an initial €100m ($107m) for the production of vehicles and powertrains in the state of Tamil Nadu by 2020.

The partnership between the two entails two joint ventures. Under the first, PSA will own a majority interest in a new company that will also be part-owned by CK Birla subsidiary, Hindustan Motor Finance Corporation, being set up to assemble and distribute its cars in India.

In the second, PSA and another CK Birla subsidiary, AVTEC, will each own half of a business set up to manufacture and supply powertrains.

Initial manufacturing capacity will be about 100,000 vehicles per year.

Manufacturing capacity for powertrains will be set to cater for domestic market needs and those of global OEMs, PSA Group has stated, and there will be a “significant level of localisation, in order to reach the necessary cost-competitiveness”.

PSA Group, which produces Peugeot, Citroën and DS Automobiles brands, has already suggested further incremental investment will take place to support a progressive ramp-up of operations in the longer term.

In 2011, PSA made a decision to re-enter the Indian market having exited a decade earlier. However, it later abandoned those plans.

The latest PSA investment news comes in the same week as a report detailing a General Motors decision to put its $1 billion planned investment for India on hold.

A GM company spokesman was cited by news service PTI as saying: "Given the shift in customer preferences in India, we are conducting a full review of our future product portfolio and have put on hold future investment in our all-new vehicle family for the market until we firm up our product portfolio plan."