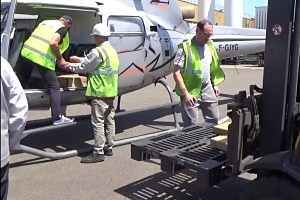 Groupe PSA was forced to use helicopters to transport parts to its car plants in France last week, after workers from financially troubled parts supplier GM&S, which is in receivership, travelled 200km from their base in La Souterraine to block access to PSA’s parts factory in Sept-Fons.

A spokesman for the French carmaker told Automotive Logistics that production at the company’s vehicle manufacturing plants in the country was unaffected by the protest, after it managed to transport key items such as brake discs via helicopter.

The issue has since been resolved after PSA and Renault agreed to increase their order commitments to the GM&S plant in La Souterraine from 3 to 5 years and to €12 million ($13.6 million) and €10 million a year respectively, according to a statement on Tuesday from the Ministry of Economy and Finance.

“These are new elements guaranteeing the sustainability of the site,” said the ministry.

The GMD Group, which put in a takeover bid for GM&S in June, has said it will retain as many as 120 of the 277 jobs at the La Souterraine site if its bid is successful.