Raising the Indian supply chain: MACE wants to "bring on the bad boys!"

Stories in this section:

“Bring the bad boys” might sound like an unusual statement from Raghunath Balkrishna Madhekar, senior advisor at the Maruti Centre of Excellence (MACE). But when Madhekar speaks, people listen. It was Madhekar, who has worked at Maruti Suzuki for three decades, who affixed the ‘FC OK’ sticker on the maiden Maruti Suzuki 800cc that was flagged off by the late Prime Minister, Indira Gandhi, on December 13th, 1983, after the engineer inspected the vehicle for its functions, appearance and performance.

The ‘bad boys’ he’s talking about are poor performing tier suppliers. And Madhekar and his team are anxious to help them. ‘Bring the bad boys. We will scale them up,’ has been the general refrain at MACE, according to Madhekar. 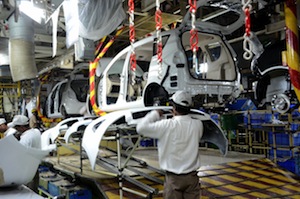 “Only 20% value addition happens at the Maruti Suzuki assembly line and the balance comes from vendors. So the quality of every single vehicle trundled out depends on the material quality supplied,” says Madhekar.

Madhekar was put at the helm of MACE when it was started almost a decade ago with the core objective of upgrading the quality of vendor supplies via systematic training. Of Maruti’s 400-odd vendors, 25 opted to be part of MACE, a non-profit registered society, by contributing Rs2.5m ($40,000) each towards the initial corpus.

According to Anand Swaroop of JBM Limited, one of several joint venture companies floated by Maruti Suzuki with local partners, MACE has been a blessing. “It has brought us Japanese knowhow and Japanese training, along with a new business opportunity,” he says. (Read more on JBM here.)

Although the supply chain arm of Maruti Suzuki created MACE to upgrade tier ones vendors, Madhekar thought it should go deeper than that. When tier one vendors narrated their challenges with their own suppliers, MACE came up with a cluster approach to train and assist in upgrading the suppliers’ supply chain.

The supply chain arm has set targets in terms of defects, ranking and problem parts per million (PPM). Zero defects remain the ultimate goal. Thanks to MACE, concepts like lean manufacturing, the Maruti Production System, muda (Japanese for waste) and value addition are common vocabulary on the suppliers’ assembly lines.

Today, the defects for most participating suppliers have?crashed from thousands to a few hundred PPM and even much lower for some. “It was tough for them,” admits Madhekar.

"In our cluster programme, we keep hearing that some of our tier two vendors are better than tier ones" - Raghunath Balkrishna Madhekar, Maruti SuzukiBut it was equally challenging for him and his original three-member team back in 2004. They had to conduct a gap analysis, help vendors in data capturing (because most had no data until then) and convince vendors to spare workers for training without disrupting Maruti Suzuki supply lines.

As of today, there are 19 clusters belonging to 13 of the original vendors who contributed to the original corpus, while 120 clusters of tier two vendors are operational with regular monthly reviews. Out of 120, 14 vendors have achieved zero PPM and maintain that level consistently. MACE and the Sudam Maitra-led supply chain arm of Maruti Suzuki work in tandem. “We keep hearing that some of our tier two vendors are better than tier ones,” adds Madhekar.

Originally it was thought the cluster approach would only last for two years; it turned out to be a never-ending chore. But Madhekar, like clients such as JBM Limited, is not complaining.