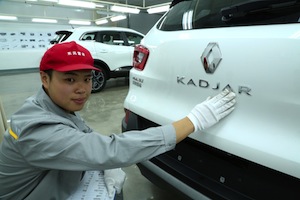 Renault-Nissan and its Chinese partner Dongfeng Group have officially opened their €870m ($949m) joint venture plant in plant in Wuhan. The Dongfeng Renault Automotive Company (DRAC) facility was built in two years following the joint venture’s formation and started production of the Kadjar SUV last month, exclusively for the Chinese market. The vehicle is made with more than 80% local content.

It will have an initial annual production capacity of 150,000 vehicles, which has the potential to be doubled. SUVs account for 30% of the Chinese market, or 5m vehicle sales. It is the fastest-growing segment and increased by 53% in 2015 according to Renault.

The car is due to go on sale in March and will be distributed to 125 dealerships across China.

According to Renault the plant’s manufacturing and logistics systems come from DFL (Dongfeng Nissan JV) and are a combination of Chinese and Japanese systems.

In a statement the carmaker also revealed that it had moved its central spare parts warehouse from Shanghai to Wuhan. Spare parts logistics are being supported by a new third part provider called FSL, which already provides services for Dongfeng Nissan. The transfer of those spare parts was a logistics feat in itself according to Renault-Nissan, employing 80 trucks to move 290,000 parts to a new 18,000 sq.m facility. According to the carmaker, three additional regional warehouses were opened in Beijing Shanghai and Guangzhou in January.