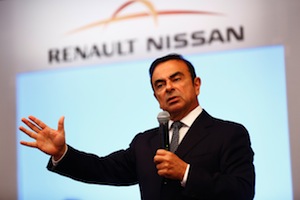 The measures should improve efficiency and revenue and follow a move back in 2014 to bring the various divisions closer together, which the carmaker said helped it generate more than €4 billion ($4.4 billion) in 2015 in “annualised synergies”.

The Alliance said it now aimed to generate €5.5 billion in synergies in 2018.

On top of this, the Alliance said it had further plans to partly converge quality and costing, and study other opportunities to increase synergies in sales and marketing, connectivity and connected services, product planning, aftersales and other support functions. Executives will be proposing various convergence projects in these areas by the end of March.

“If approved at the end of an internal review process, implementation will begin on April 1st,” the carmaker said in a statement. “Leaders in these new functions and the scope of their converged activities will be announced at that time.”

Renault and Nissan have numerous cross-manufacturing projects in France, South Korea, India and Russia. Last year, for example, the Alliance merged its purchasing activity in Russia with local carmaker AvtoVaz. The new AvtoVaz-Renault-Nissan Purchasing Organization (ARNPO) replaced the common purchasing organisation set up by the carmakers in September 2013 and made the new entity the largest buyer in the automotive industry in Russia.

“The auto industry is rapidly evolving, requiring Renault and Nissan to leverage the Alliance as a pragmatic business tool,” said Renault-Nissan Alliance CEO and chairman, Carlos Ghosn. “The road ahead is one of more convergence, working more closely together.”

That process was first started back in June 2009 when Ghosn announced the creation of a new management team at an “Alliance level” to oversee deeper integration between the two partner carmakers.

The two companies set up a combined logistics purchasing and engineering group – Alliance Logistics – the same year but in 2014 brought in order management, in-plant logistics and further plant and yard operations.