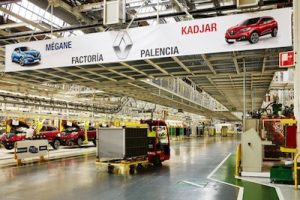 Renault’s Palencia plant in Spain has started making the fourth generation model of its popular Mégane, alongside the Kadjar, and is gradually phasing in full kitting for inbound parts delivered to the assembly line. The total number of parts used on the two vehicles made at the facility has now doubled to 4,500.

Renault is currently investing €600m ($644m) to upgrade the plant, including a new sheet metal shop, body assembly line and chassis plant. In addition, Palencia is the third Renault plant to bring in a light booth, a new inspection system developed by the Process Engineering and Design team on the basis of experience shared with Daimler.

Regarding the introduction of full kitting, where separate but related parts are pre-grouped for fitment to the vehicle, the company said that it needed to streamline the management of component diversity and bring full part kits that matched the assembly sequence as close as possible to the operator on the line. It said the use of full kitting would improve workstation ergonomics, safety, quality and overall plant performance.

Both the new Mégane and the Kadjar are based on the Renault-Nissan Alliance’s new common modular architecture – CMF C/D – meaning they share subsystems, including engine compartment, cockpit, front and rear underbody units and electrical systems. However, there remains a lot of component diversity for lineside workers to handle. Renault cites the 4Control system on the new Mégane GT, four-wheel drive on the Kadjar, and a broad choice of wheels on both, with a parts count that equals almost 100 items.

At the beginning of 2015, Renault implemented the Alliance Production Way at Palencia, which is derived from best practices established across Renault-Nissan’s production systems. Production is synchronised with suppliers through tight schedule management, according to the company.