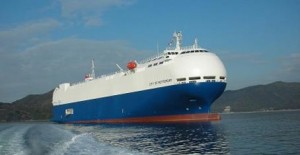 The Nissan Car Carriers’ vessel City of Rotterdam (pictured) was involved in a collision with the DFDS ro-ro ferry Primula Seaways in the UK’s Humber Estuary near Immingham port last week.

The collision happened at around 20.40pm UK time on December 3rd off Clee Ness Sands and the cause of the incident is still being investigated by the UK government’s Marine Accident Investigation Branch (MAIB).

High winds were reported in the region on the evening of the 3rd as 'Storm Desmond' battered the north of England.

Both vessels were able to make their way to the port of Immingham unassisted. Nissan UK said there were no vehicles on board the City of Rotterdam at the time of the collision.

A spokesperson for DFDS confirmed the incident adding that there were no casualties or water ingress to the Primula Seaways.

“Primula Seaways had 25 people onboard at the time, including six commercial drivers,” said the spokesperson. “Both vessels were able to continue on their journey to Immingham, where MAIB carried out an inspection of the ship and the incident. Primula Seaways is now in dock for repairs at A&P Tees Ltd. We hope she will be ready for service next week. In the meantime, DFDS has charted a replacement vessel to help service our customers on the Immingham-Gothenburg route where Primula Seaways will be operating in the future along with two sister ships.

ABP Ports, which operates Immingham port, confirmed that the City of Rotterdam was still berthed there.

“Both vessels sustained damage but were berthed safely following the incident,” said a spokesperson for ABP. “The relevant agencies have been informed and a full investigation is underway to ascertain the cause of the collision.”