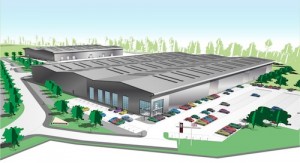 Rolls-Royce Motor Cars is building a new 30,000 sq.m technology and logistics centre in the UK at Bognor Regis, close to its manufacturing plant in Goodwood.

The facility, which represents a multimillion pound investment, will consolidate three current operations covering the inbound and outbound sides of the business: an inbound warehouse for production parts, a distribution centre, including inbound body store and finished vehicle store, and a workshop for vehicle preparation.

The luxury carmaker said that it had yet to appoint a logistics provider to manage the site. It added that the site had been designed with expansion in mind.

“Every Rolls-Royce motor car is built at the Home of Rolls-Royce at Goodwood and this new facility will provide the required local logistics support for our current and future models," said Torsten Müller-Ötvös, CEO for Rolls-Royce Motor Cars. "Rolls-Royce is a British manufacturing success and we remain fully committed to building our future here in West Sussex."

The centre is planned to be fully operational by 2016 and will benefit from its vicinity to the Bognor Regis Northern Relief Road, which opens next year.

Around 200 people will be employed at the centre, with a number of new roles created in addition to those transferred from existing logistics facilities. Those facilities were not disclosed.

The site has been identified by Arun District Council as part of its ‘Enterprise Bognor Regis’ initiative. According to Rolls-Royce the area is being developed as a premier business location involving both newly established and growing businesses. Rolls-Royce will be the first major business to take advantage of the initiative.