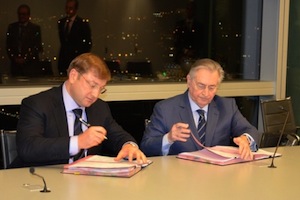 There have been a number of recent developments at the new Russian deep-water port of Bronka, which opened in October last year. Last month the port’s owner, Fenix, signed a long-term agreement for the handling and storage of container cargo with CMA CGM. CMA CGM ranks as the world’s third largest container shipping company. The port has also handled its first high and heavy cargo and announced its integration within the boundary remit of the Big Port of St Petersburg.

CMA CGM will establish four regular services calling at the port, which is situated on the outskirts of St Petersburg, connecting it via hub ports in Europe to international routes. The company will deploy vessels with a 1,800 TEU capacity on the service. Current capacity at the container terminal totals 1,450,000 TEU per year.

According to the port of Bronka, the 14.4-metre depth of berth will allow post-Panamax vessels to call there. This is supported by the equipment the port has installed to move the cargo on and off that class of vessel.

In a statement, Bronka port said, “Long-term relations with the new port determined in the signed agreement will allow CMA CGM line sustainable improvement of the services and modernisation of the operated fleet with new building of higher size ice class vessels delivered in 2016, including development of the new routes for shipments to Russia and entry to the new markets.”

“Port of Bronka is connected to the federal road network and Russian Railways network,” he confirmed, adding that the port had road connections that could handle 180 trucks an hour and four trains a day.

“For the time being Fenix is working with Russian Railways to increase the capacity up to between 8-10 trains per day,” said Shukletsov. “All necessary handling equipment is already on the terminal.”

Ready for high and heavy
Bronka has also recently handled its first high and heavy cargo. Having unloaded and cleared the 480-tons of Siemens power generating equipment through customs at the end of November, it was loaded at the port on December 22nd for onward inland delivery by rail using a special 16-axle rail transporter.

The equipment was discharged using a Liebherr mobile crane, currently the only crane of its type in the Russian Federation with a lifting capacity of 302 tons (the equipment was delivered in two units).

The next high and heavy delivery is expected on January 29th.

Bronka’s container terminal covers 107 hectares and offers five berths along quays extending 1,200 metres. Meanwhile, the ro-ro terminal covers 57 hectares, with a quay length of 710 metres and can simultaneously handle three ships. The ro-ro terminal can currently handle 260,000 units but is expected to have an eventual capacity to handle 500,000 vehicle units when fully developed. Finnlines and Transfenica are among the ocean forwarders expected to handle ro-ro traffic in and out of Bronka port.

This week the port announced that it is now officially integrated within the boundaries of the nearby Big Port of St Petersburg, in accordance with a government order dated December 29th, 2015. Work to extend the boundary of the Big Port has involved the reclamation of 2m cubic metres. According to the port, this now means all the existing regulations concerning procedures for vessels and cargo overseen by the State authorities, and other procedures implemented in Big Port Saint-Petersburg, are similarly applied at port of Bronka.