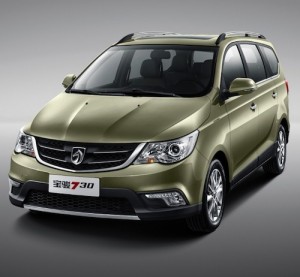 Chinese joint venture SAIC-GM-Wuling has reported immediate demand for its Baojun 730 seven-seat family vehicle. According to GM the company received more than 10,000 orders for the people carrier within 52 hours of its launch.

The joint venture announced its newest model simultaneously on its official website, and on China’s social media sites Weibo and WeChat at 7:30 a.m. on July 30. On the first two days, a Baojun 730 was ordered an average of every 43 seconds said the company.

The Baojun 730 is the second MPV offered by SAIC-GM-Wuling. Sales of the Wuling Hong Guang MPV family in the first six months of 2014 reached 371,600 units, which represented an increase of 71% from the same period last year. The Hong Guang MPV family ended the first half of 2014 with more than 40% of its market segment stated GM.

General Motors and its joint ventures in China set a new domestic sales record for July of 249,734 vehicles. Demand increased 12.7% from the same month in 2013 according to a statement from the company.

“We will continue to expand our portfolio and introduce more product offerings in China to meet increasingly diverse demand in our largest market,” said GM executive vice-president and GM China president Matt Tsien.