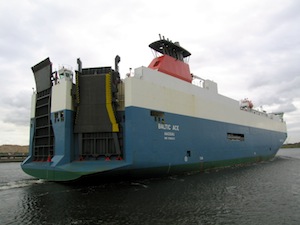 Almost a year and half since the sinking of the car carrier Baltic Ace, Dutch salvage operators Boskalis and Mammoet Salvage have started an operation to raise the vessel.

The Baltic Ace, managed by Stamco Ship Management and chartered by UECC, was on route between the port of Zeebrugge in Belgium and the port of Kotka in Finland when it was involved in a collision with the Corvus J container ship on December 5, 2012 in a busy North Sea shipping lane 65km off the Dutch coast. It quickly sank with the loss of 11 crew members and a cargo of 1,400 vehicles, mostly Mitsubishis (read more here).

In March this year Boskalis and Mammoet Salvage were contracted by the Dutch Department of Public Works to remove 540,000 litres of fuel, extract the automobiles and raise the wreck from a depth of 35 metres. The contract was awarded because of the threat posed to the environment and to shipping on the busy route towards the Port of Rotterdam. Around 16,000 vessels use the route annually.

Once the fuel is pumped out of the ship it will be cut into six pieces and lifted to the surface with giant cranes, the Dutch Department of Public Works said in a statement. Both companies will contribute to the operations with their own specialist salvage equipment.

The operation is expected to be fully complete by spring/early summer next year said the Dutch Ministry of Infrastructure and the Environment.

The Baltic Ace It was insured for between $50m and $60m according to news agency Reuters.