An artificial intelligence system from the Hamburg-based startup Carrypicker is creating climate-friendlier logistics with smart scheduling of partial loads and routes. No dispatcher could ever match its performance. 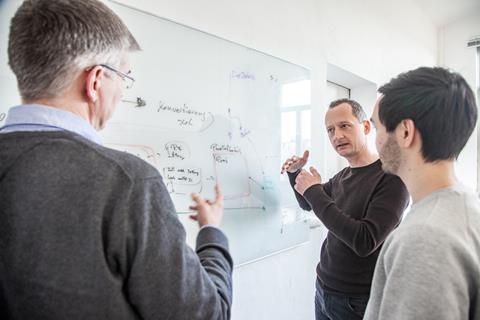 There is no trick to packing a lorry up to its roofline and then sending it from point A to point B – but it is seldom possible. Scheduling gets trickier with partial loads, which are more the rule than the exception. Too often, lorries haul too much empty space around because dispatchers fail to allocate the freight optimally.

The net effect is the equivalent of one lorry in three drives around empty on Germany’s motorways. This is not just unsatisfying from the standpoint of traffic-prone roads. Most of all, it is a terrible waste for the environment.

According to the German Federal Environment Agency, the German transport sector alone sends more than 40m tonnes of greenhouse gases a year into the atmosphere. The amount won’t be falling in the future. That is an untenable situation for Andreas Karanas, CEO and founder of the Hamburg startup Carrypicker. But it is not something that he spends time lamenting – he has come up with a clever solution to deal with the problem. Founded in 2017, the freight tech company has developed software that brings distributors and transport companies together, bundles their partial loads, plans optimised routes and automatically calculates prices. It makes the entire process as easy as booking a flight, Karanas says.

That is not a trite comparison. The company was inspired by the reservation and pricing systems that airlines use. Dozens of parameters flow into them using a largely automated process. The goal is the best possible use of the plane’s capacity, with the maximum revenue per seat. Experts talk about dynamic price-quantity management. While airlines calculate individual seating prices and optimise loads on aeroplanes, Karanas wants to optimise cargo allocation and logistics, make trips more profitable, and reduce environmental stresses. Ultimately, fewer lorries are dispatched.

The company is turning to artificial intelligence tools, machine learning, and predictive analytics in its mission. They all flow together in the software platform. Based on more than 300m bits of freight data,  Carrypicker calculates the best route for each load. The AI engine automatically allocates all the partial loads on the available vehicles. Some compare it to a “transportation Tetris.” The algorithm even looks into the future: The software identifies recurring patterns, perhaps showing that transport orders can be most effectively and quickly bundled on a particular day for certain routes. It then recommends shipping the goods on that day.

The result: The system has made it possible to increase utilisation of the lorries by 70-80%. That may seem negligible at first, but it reduces the cost of transport appreciably and lowers CO2 emissions. This fact has already been confirmed based on the internationally recognised calculation method from the Global Logistics Emission Council (GLEC). Projected onto Germany’s annual transport volume alone, the AI engine eliminates the equivalent of the yearly CO2 emissions of a city the size of Frankfurt. That works out to a 4.1-megatonne decline in greenhouse gases.

That may not be the end of the story. Over time, the system will continue to learn and deliver steadily to improve results, so there is the potential for even significantly higher utilisation of hauling capacity, Karanas said. AI takes advantage of the very complexity of the task: In the calculation, more than 50 factors are considered, some of them highly dynamic. They include the day of the week, weather, mobile construction sites, traffic jams, holiday periods or traffic density based on time of day.

At a minimum, it is becoming clear that no dispatcher equipped with Excel spreadsheets and simple planning tools, not to mention pencil, paper and gut feelings, can compete with it. Bundling sounds easy, yet it is very complex. Better yet, Carrypicker is also designed to ensure fair payment to the transport company almost at the push of a button. In its price determination, the software automatically works the minimum wage, specified breaks and the required maintenance for the vehicles into the calculation, Karanas said. “This allows us to keep companies from underbidding one another with dumping-level prices. Unfortunately, this is a frequent occurrence.”

The process itself is straightforward for senders: They only need to input the location for pickup and the destination, along with freight data such as weight and the number of goods, into the Carrypicker app. Then the system combs through the current orders of the 2,000 transport companies cooperating with Carrypicker and checks to see which of their 15,000 vehicles still have the capacity for partial loads. The company has recently become commercially viable. The system’s development had been supported with about €2.4m from the German transport ministry. There are discussions about other “AI made in Germany” innovations for transport logistics.

“For Germany as a centre of industry, this means designing innovative business models for the logistics market that boost efficiency and competitiveness and maintain data sovereignty,” said Steffen Bilger, parliamentary state secretary at the ministry, at the end of the support programme last summer. “With Carrypicker, empty runs can be substantially reduced. Digital applications are thus contributing to climate protection and helping to establish successful business models.”

The next stop for Karanas:  His system is due to be developed as software as a service so it can expand more widely, paving the way for greater sustainability and somewhat more climate-friendly road transport and logistics.