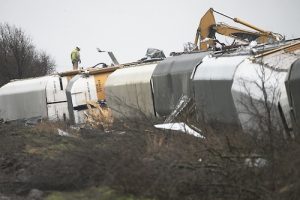 Severe storms, including three tornados, which have hit Texas this week have caused widespread damage to homes and infrastructure, knocking out power to tens of thousands of residences and businesses, and causing flooding.

In one incident recorded near Thrall in Williamson County, 12 vehicle-carrying rail wagons were derailed. They were transporting vehicles between Laredo on the border with Mexico to Chicago, Illinois by rail provider Union Pacific. The company said the cause of the derailment was under investigation but US news sources, including KVUE, have been reporting that the derailment was down to the high strength of the gales that were in excess of 100 mph (160 kph) in some areas.

In a statement a spokesperson for Union Pacific told Automotive Logistics: “Just before 1:30am on February 20th, 12 cars derailed in Thrall, Texas. There were no injuries to employees or the public. Crews were able to clear all but three cars prior to reopening the mainline Monday evening. The remaining cars are being removed today [February 21st].”