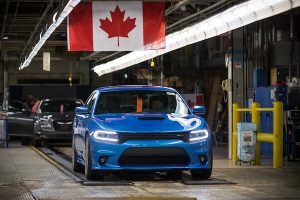 Union-affiliated workers at the Lear seating plant in Ajax, Canada, went on strike over the weekend, disrupting production at the nearby Fiat Chrysler Automobile (FCA) plant in Brampton (pictured) to which Lear supplies complete seats from Ajax on a just-in-time basis.

In a statement, FCA admitted that the action taken by the 320 members of the Unifor union – brought about by the failure of negotiations to secure a new collective agreement on pay and conditions – had halted assembly at the site, which makes the Chrysler 300 and Dodge Challenger and Charger.

A spokesperson for FCA said Lear and Unifor had since reached a tentative agreement with a ratification vote scheduled for 18.00 on Tuesday May 1. However, workers rejected the offer meaning disruption to Lear production and assembly at FCA is continuing.

"Production at the FCA Brampton Assembly Plant remains suspended today, following Lear Ajax’s failed ratification vote on Tuesday," said FCA in a statement. "Employees did report for a partial shift this morning. Second shift is being cancelled for all hourly employees with the exception of Skilled Trades or unless otherwise notified by their supervisors."

“Unifor bargained up until the deadline but unfortunately, it became clear that Lear was just unwilling to make a fair offer,” said Unifor national president, Jerry Dias.

Lear has not so far provided no statement on the matter.