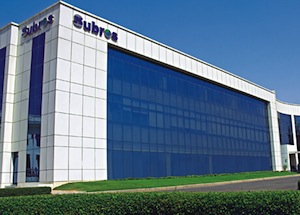 A massive fire at the Manesar facility of Indian supplier Subros, which makes automotive air-conditioner units, has had the knock-on effect of temporary production stoppages at two plants run by carmaker Maruti Suzuki, because of a parts shortage.

“Owing to an unfortunate incident of fire at the Manesar facilities of our supplier, M/s Subros Limited, on Sunday (May 29th), supplies of components from that plant have been disrupted,” the carmaker said in a statement. “As a consequence, Maruti Suzuki India Limited will have to temporarily suspend manufacture of cars at its facilities in Manesar and Gurgaon, starting the second half of Monday (May 30th).”

According to Maruti, it is working with Subros to assess the extent of damage to essential equipment.

“We are also examining the options available to start supply of components from other facilities,” said the statement from Maruti. “Production will resume as soon as components become available.”

Subros was supplying 60% of Maruti Suzuki’s air-conditioners, according to a report in the Economic Times of India. It also supplies air-conditioning parts to a range of other Indian carmakers, including Tata, Mahindra and Renault-Nissan, though the impact on those customers is currently not known.

According to the Economic Times, the damage was exacerbated after some LPG cylinders stored at the supplier facility started exploding.

Subros is expected to shift supply to its Noida facility roughly 60km away from Manesar and to the southeast side of New Delhi. It also has other facilities making air conditioning units in Chennai, Pune and Sanand.• In other news, Maruti Suzuki will start exporting Super Carry light commercial vehicles (LCVs) to South Africa and Tanzania this month. The first volume of nearly 100 Super Carry LCVs has been dispatched for shipment. Besides African markets, the company said it also planned to export the Super Carry to other international markets.

The India launch for Super Carry is planned in the second quarter. To begin with, it will be launched in select parts of the country.