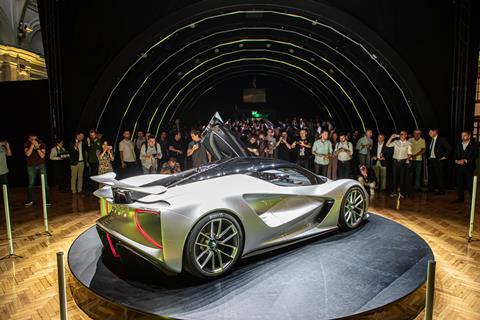 The companies will integrate cell formats and chemistry to enhance energy density and power capability, fast charging and other specifications.

The partnership will see Britishvolt and the Norfolk-based carmaker develop an electric sports car powered by Britishvolt cells and with advanced electric propulsion technologies developed by Lotus.

The project will benefit from the proximity of Lotus and Britishvolt’s R&D centres of excellence in the West Midlands, the UK’s ‘golden triangle’ of battery development. The Lotus Advanced Technology Centre (LATC) opened in Wellesbourne in 2020 as the global headquarters of Lotus Engineering, the firm’s consultancy division.

“Britishvolt is excited to be working with such a prestigious and highly acclaimed OEM as Lotus,” said Oliver Jones, chief commercial officer at Britishvolt.

“This MoU demonstrates that the legacy one-size-fits-all cell strategy is no longer valid in the rapidly developing electric mobility market,” he added.

The research and development are expected to improve and influence the electro chemistries of more affordable batteries and EVs.

This follows the announcement by the UK Government that their support for Britishvolt through funding the Automotive Transformation Fund. This allowed their long-term partnership with Tritax and abrdn to issue £1.7 billion ($2.27 billion) in private funding.

See the report of the government support for Britishvolt on our sister site, Automotive Manufacturing Solutions

“These are the first exciting steps on the journey towards an all-new electric sports car from Lotus,” said Matt Windle, Lotus Cars managing director.

Last year, Lotus committed to a purely electric future. In the coming months, the company will be unveiling the Type 132, an all-new and all-electric Lotus SUV, and has confirmed three more EVs are on the way.

According to Advanced Propulsion Centre (APC), the UK will need over 90GWh per annum of batteries for cars and light commercials alone by 2030, which represents over 11% of the total demand across Europe.

Here, there and everywhere

Lotus is also currently undergoing a business transformation. The UK sports car company has a vision of becoming an all-electric performance global brand. This new agreement follows Lotus’s £100m investment in its UK facilities, including manufacturing centres at Hethel for the Evija pure-electric hypercar and Emira sports car.

With its Vision80 business transformation strategy to 2028, Lotus hopes to become a globally recognised sportscar manufacturer.

The OEM is building a number of manufacturing sites worldwide, with vehicle production set to begin this year at the new Wuhan location. Production in Wuhan accompanies its new sportscar manufacturing and performance facilities at the carmaker’s flagship plant in the Hethel, UK.

Despite the worldwide disruption affecting the automotive industry, Lotus recently saw its largest global sales growth in a decade. Sales in the UK increased by 29% last year and 37% in Belgium. In addition, retailers saw a 111% year-on-year increase in sales In the North American market, the OEMs best number in ten years.

In the Asia-Pacific region, Lotus sales in Japan had the best year since 2015, Australia since 2018 and Hong Kong since 2014. Furthermore, despite Lotus cars only being available in Qatar since 2016, the peninsula had its best year ever.

“The pace and the speed of change of Lotus is like nothing I’ve ever seen before in my career quite frankly,” Michael Dickinson, executive director of supply at the carmaker told AL in December. “Everything is changing all at the same time, so it’s important to make sure that you’re working in parallel.”

Lotus is also building its Emira sportscar, a new vehicle that accumulates the design, cultural and technological experience of the outgoing Elise, Exige and Evora models, but benefitting from considerable investment in product, production and supply chain.

China’s Geely owns a majority 51% stake in Lotus, with the remaining stake owned by Malaysian conglomerate Etika Automotive. The companies are not only investing billions in Lotus’s rejuvenation but are utilising their shared engineering, platforms, electrification experience and supply chains across its group of brands, including Volvo Cars, Polestar, Lynk & Co, Zeekr and more.

Over the last year, the company has also been developing its facilities to improve efficiency and consolidate in certain areas. It combined a previous, separate facility for aluminium chassis subassembly together with its lightweight steel and fabrication operations in Norwich, lowering considerable logistics costs. It is driving the synergies gained in the supply base and making stronger connections to feed parts into the production locations.

According to Dickinson, the Hethel in Norwich site has been completely transformed and serves as the nucleus from which all logistical operations function.

One of the primary changes being made at Lotus is the shift in the supply base out of the UK and overseas to Asia. The carmaker is changing the vehicles it makes and while 60% of suppliers would be based in the UK for the legacy products, it is now closer to 60% of parts being sourced from overseas.