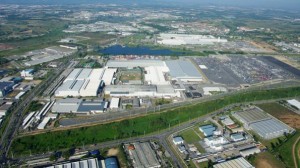 China has signed an agreement with Thailand to build a double track rail link stretching more than 870km between Nong Khai on the Laos border with Thailand, to the Thai industrial zone in the east of the country. According to industry analysts in the region, the development bodes well for the automotive industry.

Thailand will prepare the groundwork for construction and China will build and develop the rail network. The railway will link Thailand’s Laem Chabang port with Laos, and that stretch in turn is expected to connect with China once a provisional agreement the country has with Laos to establish a link with Kunming is approved.

According to analysts at Ipsos Business Consulting, the move is a clear indication that China is planning to build on the infrastructure to further open up and increase trade with Southeast Asian countries.

“Specifically for the automotive industry, there are definitely opportunities for increased cross border trade given that China has the world’s largest vehicle population coupled with Thailand’s maturity in automotive assembly and component manufacturing,” said Wijaya Ng, head of Ipsos Business Consulting, Greater China. “Government policies and corresponding trade agreements are likely to play a key role to realise synergies for the automotive industries in both countries once the railway infrastructure is in place.”

This was backed up by Ford, which noted that any infrastructure projects in the fast-growing ASEAN region would help support ongoing economic development, including in the automotive industry, and help tap into its huge potential.

“Additionally, we expect our business and operations to continue benefitting from all economic partnerships and trade agreements in the region, including the ASEAN Economic Community,” said a spokesperson for the company. “These help to further strengthen intra-regional trade and provide opportunities for integrated growth among all markets in the region. With a combined population of roughly 630m people, and a region that is among the fastest growing globally, the opportunities are highly promising.”

Improvements to automotive logistics within Thailand are also likely, with two of the rail hubs proposed as part of the infrastructure development planned for Ayuthaya and Rayong, the two main centres for vehicle and parts production in the country. Carmakers including General Motors, Honda, Ford, Mazda, BMW and Suzuki are based in the these areas.

On the outbound side, this could mean better links for finished vehicle traffic to the ports of export. And, as reported in Automotive Logistics last year, car parts are among the largest road exports from Thailand to Laos, as well as Myanmar, and better rail links could bring greater efficiency in exports.

However, the benefit of links to low cost countries such as Laos for parts supply to Thailand’s carmakers comes with a proviso, according to Sanpichit Songapaisen, head of Ipsos Business Consulting, Thailand.

“Diversification might be limited due to the issue of skilled labour and Laos’ capability to meet the automotive OEMs' standards,” he told Automotive Logistics. “Vietnam is a good example of a country that cannot meet the just-in-time process of Japanese car producers. This suggests that diversification would be only for the low value parts.”