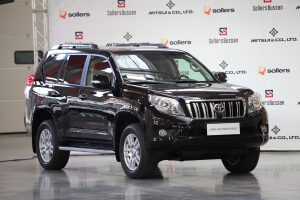 Toyota has pulled production of its Land Cruiser Prado SUV from the Sollers-Bussan plant in Vladivostok, in far eastern Russia, and is now exporting volumes for the Russian market from its Tahara plant in Japan.

Sollers-Bussan is a 50-50 joint venture between Russian carmaker Sollers and Japanese conglomerate Mitsui & Co. The Vladivostok plant began making the Prado in 2013 from semi-knockdown (SKD) kits shipped in by Toyota from Japan, with output set at 1,000 a month.

The vehicles will now be shipped from Japan via Nagoya port to Russia via Vladivostok and St Petersburg ports.

Toyota’s Tahara plant already makes the Land Cruiser along with six other models including the S, GS, IS, GX, RC and 4Runne. It also produces engines.

Domestic vehicle sales in Russia continue to stagnate and are half what they were in 2012-2013 when the Sollers-Bussan joint venture was established. The situation has been hampered by a steep decline in the value of the rouble, which has driven up the cost of the foreign parts imports.

However, a spokesperson for Toyota told Automotive Logistics that the decision was not directly related to the sales decline in the Russian market but was “a pure business case decision”.  Sales of the Prado will continue and its supply to the Russian market will not be affected, said the company.

Toyota also maintained its plan to double capacity at its St Petersburg plant to 100,000 units.

"Sollers-Bussan, Sollers, Mitsui and Toyota have thoroughly investigated various business schemes, including shifting to CKD [complete knockdown kit] production, and found them not viable from a business perspective,” said Toyota in a statement. “Finally the four parties agreed to terminate production at Sollers-Busan.  The decision does not impact Toyota's mid- to long-term commitment to the Russian market and we have not changed our plans to double production capacity within this year and launch the RAV4 at Toyota Motor Russia's St Petersburg plant in 2016.  We are committed to continuing our contribution to the development of the Russian automobile industry and providing products that satisfy consumers."

Sollers-Bussan has not confirmed what the withdrawal of Toyota production means for future of the production facility or its joint venture.

As was revealed at this year’s Automotive Logistics Russia conference, the Russian market may now be facing an even worse economic situation than it did in 2009. Passenger car sales in the first six months of this year are down by nearly 40% compared to 2014 (a year in which the market already declined for the second straight year). According to Sergey Litvinenko, director of automotive advisory services at PwC, the forecast for the rest of the year is a drop of 35% to 1.52m units.

A number of carmakers have recently cut back production or pulled out of the market. Most recently, GM has stopped volume production of midrange vehicles at its plant in St Petersburg and will end sales of Opel vehicles in Russia by the end of the year as well as most Chevrolet models. Volkswagen has also cut production at its plant in Kaluga this summer (read more here).