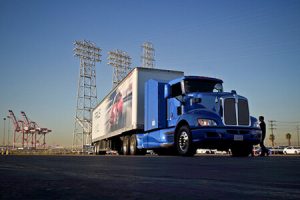 Toyota and Shell Oil Products US have been provisionally awarded $8m by the California Energy Commission (CEC) to develop the first hydrogen truck refuelling station at the port of Long Beach.

If approved at a commission meeting on May 9, Shell will build, own and operate the station at the Toyota Logistics Services (TLS) site in the port. From there, it will fuel Toyota’s ‘Project Portal’ heavy-duty hydrogen fuel cell truck and public fleets. The plan follows a trial conducted last year.

Craig Scott, director of advanced technology vehicles at Toyota Motor North America, said the company aimed to demonstrate that fuel cells are one of the most innovative and sustainable technologies for light and heavy-duty vehicle electrification.

Shell will source the hydrogen from Toyota’s adjacent Tri-Gen facility, which produces the fuel from biogas. Shell’s hydrogen general manager, Oliver Bishop, said: “Hydrogen offers a promising path for decarbonising transport, particularly the heavy-duty sector where there are few alternatives to conventional fuel. Shell and Toyota will combine their expertise to deliver an effective alternative fuel for Californian freight.”

The companies’ project is backed by the port of Long Beach authority because hydrogen-fuelled yard tractors and forklifts will reduce petrol consumption, exhaust fumes and greenhouse gases, and help meet the authority’s goal for the port to become a zero-emission location.

In Japan, Toyota is a leading member of the Aichi Low-Carbon Hydrogen Supply Chain Promotion Association. The association aims to create a hydrogen-based society within the prefecture, which includes Toyota City and many Toyota Motor Corporation operations, not least the Motomachi assembly plant where the OEM is accelerating the use of hydrogen-fuelled forklifts.