Toyota to start production of RAV4 at St Petersburg plant 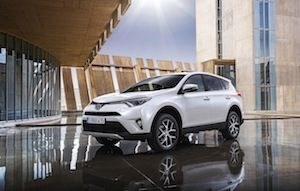 Japanese carmaker Toyota has shown some rare evidence of confidence in the Russian market with the announcement that it will begin production of its RAV4 SUV there from August this year. It will be made alongside the Camry, which Toyota has been making at its plant in St Petersburg since 2007.

As with the Camry, the RAV4 will be distributed on the Russian market as well as to Belarus and Kazakhstan, which are in the Russian Customs Union. Currently, the RAV4 is imported as a finished vehicle from the carmaker’s Tahara plant in Japan, as well as from the Nagakusa plant run by Toyota Industries, also in Japan. It is one of the carmaker’s most popular models on the Russian market; last year it sold more than 27,000 units there.

“The Russian automotive market remains one of the top priority markets for Toyota on a global level,” said Hidenori Ozaki, president of Toyota Motor. “Despite the temporary volatile situation, our mid- and long-term strategy and plans in Russia remain unchanged. The start of production of the Toyota RAV4 is a key condition for Toyota’s sustainable development in Russia, as well as our contribution to the local economy and society.”

To support the addition of the RAV4 Toyota has enlarged the manufacturing shops and expanded the plant’s production lines. It has also installed new equipment in all shops, including automation of the body welding, assembly and stamping. That expansion, which doubles annual capacity to 100,000 cars, has cost €90m and brings total investment in the plant to €223m ($247m).

The latest announcement follows Toyota’s defence of its commitment to Russia in the wake of its decision to stop Land Cruiser Prado assembly in Vladivostok in favour of imports from Japan.

Rival Japanese carmaker Nissan has said it will build the Qashqai in Russia this year, supported by parts supply from the UK. That decision also shows commitment in the wake of the carmaker’s announcement last year that it was halving production at its St Petersburg plant. Along with the Qashqai, this year the plant will be making models of the X-Trail, Pathfinder and Murano.