Toyota Motor Corporation has announced the development of a new engine plant in Indonesia near the company’s assembly plants in Karawang, some 50km from Jakarta. The plant will export standard engines and boost the company's localisation in Indonesia.

The investment is part of Toyota’s expansion of production in Indonesia for the domestic market and exports, as the carmaker takes advantage of low import duties across the ASEAN (Association of Southeast Asian Nations) region and free trade agreements to other developing markets. The plant is also part of wider supply chain investments by carmakers in Indonesia to increase localisation of components in the country to reduce supply chain and logistics costs.

Toyota anticipates the engine plant’s completion to be within the first half of 2016. It will have an annual production capacity of 216,000 units, and 400 new employees will be hired. Toyota will invest about 23 billion yen ($234.5m) in the plant.

Toyota Motor Manufacturing Indonesia (TMMIN) currently has two assembly plants in Karawang, along with an engine plant and a stamping plant in Sunter, North Jakarta. Growth in the Indonesia and opportunities for export across the ASEAN region is driving higher investment by Toyota in the region.

“With the commissioning of Indonesia’s second plant in Karawang, production is estimated to reach 180,000 units by the end of this year, and 250,000 by the end of 2014,” said Dushyant Sinha, principal consultant for automotive and transportation within the Asia-Pacific region at Frost & Sullivan, a consultancy.

TMMIN builds the Innova minivan and Fortuner SUV at an assembly plant in Karawang. Just this year it started building the Etios Valco, a hatchback, at a second plant in Karawang. The company also builds engines and stamping parts at plants in Sunter, North Jakarta.

Toyota’s current Sunter engine plant has annual production capacity for 195,000 engines, all of which are for the innovative international multi-purpose vehicle (IMV) series. The Sunter plant currently supplies IMV models including the Indonesian-built Innova and Fortuner, as well as Hilux pickup trucks, which are built in Thailand, South Africa and South America.

The engines built at the new plant in Karawang will be for vehicles other than the IMV series, Toyota said, and they will also be exported, further cementing Indonesia’s position as an engine production and supply base for Toyota.

The company did not confirm to which markets the new plant would export. It has also yet to specify which non-IMV vehicles in Indonesia it would supply, although these currently includes the Etios Valco at a neighbouring plant in Karawang. According to Frost & Sullivan, TMMIN currently imports powertrain components not built in Sunter from Thailand and Japan.

Indonesia’s growth as a key engine and supply base

Indonesia, with a population of around 240m, has the potential to be one of Asia’s largest automotive markets. According to Gaikindo, the country’s automotive manufacturers association, sales of passenger vehicles, trucks and buses rose 12.4% in the first six months of this year to nearly 602,000 units. A Toyota spokesperson in Japan estimated that the  total market would reach 1.2m units this year, with production at similar levels. Sales are expected to hit the 2m mark by 2018. Toyota currently has close to 36% share of the total vehicle market. 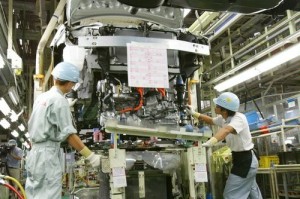 The country is also a rising hub for the import and export of vehicles and parts. In 2012, Toyota produced 155,000 vehicles, and of these, 40% were exported. According to Toyota, its plants in Karawang export the majority of finished vehicle production to the Middle East, the Pacific Islands, and to Asian countries. For complete knockdown kits, the plants export to Malaysia, the Philippines, and Vietnam.

Along with the growing market, investment in Indonesia as a production and export hub for engines and vehicles is also likely driven by free trade agreements across ASEAN, which provide access to emerging markets at reduced tariffs. Frost and Sullivan’s Dushyant Sinha predicted that lower duties under the ASEAN Free Trade Agreement (AFTA) would facilitate a greater trade of components.

Localisation of supply chain in Indonesia

Supply chain localisation is fairly advanced for the top-selling models built in Indonesia, according to Sinha, with average levels of 75-80%. In terms of Toyota’s supply chain, models assembled locally, such as the Avanza, Innova and Rush, have a high level of localisation at close to 80%.

However, further localisation of the supply chain is expected within the country. With Indonesia poised to become the largest vehicle market in ASEAN, and a growing base for exports, “it will be imperative for OEMs to increase localisation levels, lower their supply-chain costs and remain competitive,” Sinha told Automotive Logistics.

This need to reduce supply chain costs, coupled with the new policy measures introduced by the Indonesian government – such as the recently-announced Low Emission Carbon and the Low Cost Green Car Policy – should further incentivise greater localisation in Indonesia, added Sinha.

There are, however, challenges to this increased level of localisation, with Sinha citing  poor economies of scale, a lack of competitiveness, poor or underdeveloped infrastructure, unavailability of skilled labour, a weak technology base and low productivity as some of the key factors that restrain localisation. Logistics and poor infrastructure will also increase sourcing costs for OEMs and will prove a further challenge.