Iran’s carmakers are looking to sell vehicles in Russia in the next few months, as well as mulling future plans to localise assembly in the country. However, exports from Iran to Russia are compromised given the state of the market, the cost of the logistics and the quality of the products on offer.

However, there are a number of more modern assembly facilities now available in the wake of the western carmakers that have pulled out of the country which could provide opportunities for domestic production. 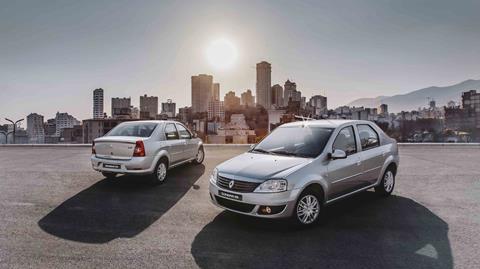 Iran Khodro, the biggest carmaker in Iran, plans to selling the Tara model in Russia at the beginning of the next year. Behruz Ahmadzade, head of the testing department at Iran Khodro, told a Russian government publication that if all went well the carmaker will expand the range of vehicles on offer and then look to localise production.

Tara is a slightly redesigned Peugeot 301. Compared with the basic version available on Iran’s market, the company will add a range of additional features for the Russian market. They include a surround-view system, a video recorder, heated rear seats, LED headlights, a sports exhaust system and a starry sky-style illuminated headliner for the interior.

Mehdi Khatibi, general director of Iran Khodro, disclosed that the carmaker plans to sell at least “several tens of thousands of finished vehicles per year on the Russian market.”

Reviving the Tondar
The second largest Iranian carmaker, Saipa, hopes the Russian market will help it ramp up production capacities. The company is considering resuming assembly of the first generation Renault Logan from assembly kits imported from Russia. Saipa curtailed production of Logan, which was marketed under the brand name Tondar in Iran, in 2018, when Donald Trump pulled out from the so-called nuclear deal and re-imposed harsh sanctions against Iran’s economy.

The restrictions prompted Renault to suspend its cooperation with Iranian partners. Saipa has reportedly initiated talks with Russia’s carmaker Avtovaz hoping to resume Tondar assembly from Vaz-type engines and components the Russian carmaker localised in the country over the past decade under its alliance with Renault and Nissan. However, the details of the negotiations have not been disclosed.

Saipa also announced plans to begin exporting its finished vehicles to the Russian market, with the first deliveries scheduled for the end of 2022. So far, the company has not provided its planned sales volume expectations.

Sanction swings
Iran remains one of the largest finished vehicle producers in the Middle East. In 2021, Iranian carmakers manufactured 965,000 finished vehicles, according to estimates by Iran Investment Monthly. The Islamic republic saw its automotive industry expanding in the early 2000s, when the output jumped from 277,000 finished vehicles to 1.65m in 2011, primarily through the efforts of Peugeot, Citroën, and Renault.

The first sanctions imposed over the Iranian nuclear deal, however, triggered a mass exodus of Western businesses from the country and production dropped to 743,000 units in 2013. When in 2014, the sanctions regime was softened, the automotive industry bounced back, reaching the production level of 1.5m units, until the recent sanctions again caused a new downward trend.

In the background of near-constant sanctions pressure, Iran’s carmakers have a relatively high level of technological independence. The Russian newspaper Kommersant reported that Iranian companies currently produce engines, ABS, airbags, and converters, but lack other components, such as automatic transmissions, which they have to import from China.

On the other hand, technological independence comes at a great cost as one of the critical features of Iran’s cars is technological backwardness, the publication said. It was referring in particular to a high-profile road accident that happened in the country at the beginning of 2022, involving nearly 60 cars. A follow-up investigation showed that not a single airbag went off in the locally produced cars.

A second attempt
There are strong doubts about whether Iran’s carmakers have anything to offer the crisis-ridden Russian market. Iran Khodro made the first attempt to establish a foothold on the Russian market in 2006 when the automaker only managed to sell 12,000 finished vehicles in two years. It withdrew because of the poor sales performance.

A source in the Russian automotive logistics industry expressed doubts that the Iranian companies would enjoy any more success this time. He explained that the only chance Iran has to succeed in Russia is to sell vehicles more cheaply than Russia’s own Avtovaz. However, the cost of delivering finished vehicles through the Caspian Sea to the Russian south and then to the European part of the country is going to be huge “in the current circumstances” and will likely affect the final price.

Given that the Russian market in its current state is not likely to consume a large number of Iran’s vehicles and the logistics cost per unit would be high, there seems little point in trying. The source said that state aid could be a game changer but the low technological level of Iran’s finished vehicles is still expected to discourage the average Russian customer.

“Iran Khodro, in fact, copies the French brand, Peugeot. And a copy, as you know, will never be as good as the original,” said Lilia Markova, CEO of Gazprombank Autoleasing, adding that finished vehicles of Iranian origin frequently have problems with quality. “A detailed study of Iranian cars shows that the quality of body elements, trim parts and even welding seams leaves much to be desired.”

Alexei Makarov, development and corporate management director of the Nizhegorodets car dealer agreed: “Given that these brands do not produce the most modern cars, they have little chance of claiming a large stake in the Russian market. Russian customers choose vehicles taking appearance into account and drawing attention to the brand’s reputation. Iranian cars are far inferior to those [that used to be available] on the market.”

On the other hand, Markova suggested that by getting state subsidies from the Russian government, Iranian companies could try to localise their production at the automotive plants left by Western carmakers and employ local talent. This plan could be viable, providing that Iran’s automakers successfully market their products and secure sufficient sales.