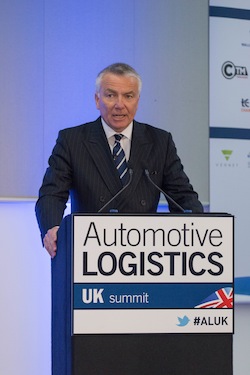 More accurate forecasts and an optimised network are crucial for port operators and ocean transport providers if the perennial problem of bottlenecks is to be avoided.

The UK car industry, in particular, continues to grow, meaning finished vehicle flows in and out of the ports supporting the outbound sector are facing capacity constraints. There is not a quick fix to the problem given the current challenges for UK ports in terms of space, pressure on productivity and fiscal limitations. However, according to Simon Bird, regional director for the Humber ports operated by Associated British Ports (ABP, pictured), these challenges could be overcome through technology and innovation.

The current trend of automation and data exchange, otherwise known as Industry 4.0, has given us the rise of the ‘smart factory’ but, at last week’s Automotive Logistics UK summit, Bird wanted to talk about the ‘smart port’. According to Bird, it is a concept that could transform the speed of throughput while reducing costly and unnecessary handling by digitally connecting all aspects of port activity through the Internet of Things (IoT). The IoT connects objects, or anything with an on/off switch, in a network via the internet, allowing them to send and receive data. Bird said a fully automated port exploiting this technology could meet the demands on space, productivity and finance in an efficient, agile and connected way.

Achieving this is important for ABP, given that it handles 1.7m vehicles a year through its facilities in the Humber, which include Immingham, Grimsby, Hull and Goole, as well as at Southampton, the UK’s biggest vehicle handling port. That volume is equivalent to 40% of all imports and exports through the UK.

Bird pointed to the use of the existing technology available within the vehicles being handled to help with port efficiency. “Telematics used to track the vehicle via onboard GPS units working in conjunction with network technologies is a capability that exists,” he pointed out. GPS can locate a vehicle precisely to its bay in a fully mapped compound.

“We’ve gone from barcode scanners to passive RFID to active RFID, and now a combination of GPS locating technology, wifi and 4G connectivity within the compound can identify the vehicle through the distribution process,” said Bird.

Bird went on to paint a picture of the future smart port where vehicles unloaded and parked themselves using GPS to find the precise location (the container business already uses self-guiding Mafi trucks to do the same thing). He also speculated on the potential for vehicles to load themselves onto trucks for delivery to the dealer out of the port.

“While there is a reluctance to use self-driving technology exclusively on the roads it would far easier to implement this in the safe environment of a vehicle compound,” said Bird.

Among the other things Bird saw on the horizon were autonomous ocean-going vessels. Pointing to the American Navy’s anti-submarine Sea Hunter vessel, Bird said it was only a matter of time before unmanned commercial ocean-going vessels, including pure car carriers, would be in use. The use of drones for vehicle identification and 3D printing at the port vehicle processing centres was also on the cards in the future smart port, he suggested.

At the end of the day, it is about making the best use of what you have at your disposal, said Bird.

“With space at a premium, optimising what you have is becoming increasingly important,” he said. “Using software programs to predict arrival and departure, and the space the cargo will need, will help free up where it should be best located. This already exists, but optimising space across a number of ports, and collaborating with OEMs, logistics providers and onward transport companies, that is something new.”